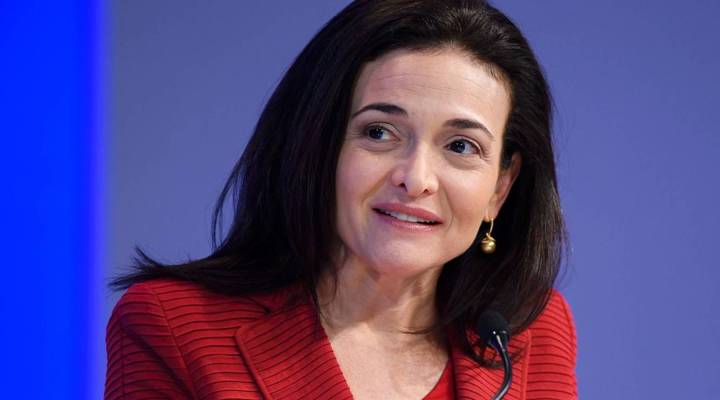 Take the average woman and the average man who worked all of 2016. Today marks the day that she will have earned the same amount that he did by the end of last year.

As part of Equal Pay Day, various organizations are trying to do their part to address the wage gap, like Sheryl Sandberg’s nonprofit LeanIn.org. The organization is launching a campaign called #20PercentCounts, which signifies that women, on average, get paid 20 percent less than men in the U.S.

Various businesses across the country have teamed up with LeanIn.org, agreeing to offer 20 percent discounts or special offers.

Sandberg joined us to discuss how the organization has evolved over the past couple of years, why equal pay is beneficial to all of us and what role public policy should play in solving the issue. Below is an edited transcript.

Sheryl Sandberg: Thank you for having me, David, and thank you for caring about this issue. Today is an important day.

David Brancaccio: So you and I will talk about this on the radio here, and people will note this, but there’s a lot of organizing going on to move this issue forward, to actually get some redress on some of these things.

Sandberg: Absolutely. When you think about the average working woman supporting children, the average working woman would earn over half a million dollars more in her lifetime. And the number of working women living in poverty would be cut in half. That benefits all of us. Those are children who are going to not suffer from food insecurity, not worry about where their next meal is coming from or whether the electricity in their home is going to get turned off. That kind of stability helps children thrive and helps families thrive. And again, these families deserve it. We all deserve equal pay.

Brancaccio: How do you feel about pay transparency? I’ve done some reporting on this. A lot of times discrimination can hide if we’re not really sure what the guys are getting paid and the women are getting paid.

Sandberg: I think it’s really important for companies to be very transparent in how they pay people. It’s also really important to be very transparent and audit yourself on whether or not you are paying fairly. So at Facebook, we’ve done this for many years. Other companies are doing it every single review cycle. We look systematically to make sure that women and men who are at the same level are getting the same pay. And then — and this part’s really important — we look at our promotion rates and our rating rates. That way it can’t be that, “Oh, women and men are getting the same pay at the same level, but we’re promoting the men faster than the women.” We’re looking at our performance ratings. We’re looking at our pay rates, and we’re looking at our promotions to make sure that women and men are being treated fairly. More companies need to do this. We also have to think about our public policy: raising the federal minimum wage. Nearly two-thirds of minimum wage workers are women, and the federal minimum wage is way too low. And so there’s a public policy role to be played in this as well.

Brancaccio: Facebook, your employer. Microsoft. Apple. The data show these companies have made big strides in this area, but other prominent tech companies don’t have this kind of track record. What has to change? You’ve just listed a number of things. I assume you wish other companies there in Silicon Valley would pursue the same kind of system of transparency and auditing that you just described?

Sandberg: Absolutely, and not just companies in Silicon Valley, even though every single Silicon Valley company should be doing it. Every company should be doing it. Because we know that the pay gap is real. We know that when you control for education and experience, the gap is nearly unchanged. We know that women and men who are doing very similar jobs, with very similar skill levels and similar educational requirements, are getting paid differently. That means we’re not treating families fairly. But that means we’re raising more children in poverty than we need to, and from a business’ point of view, you’re not getting the best out of your employees if they’re not being treated fairly.