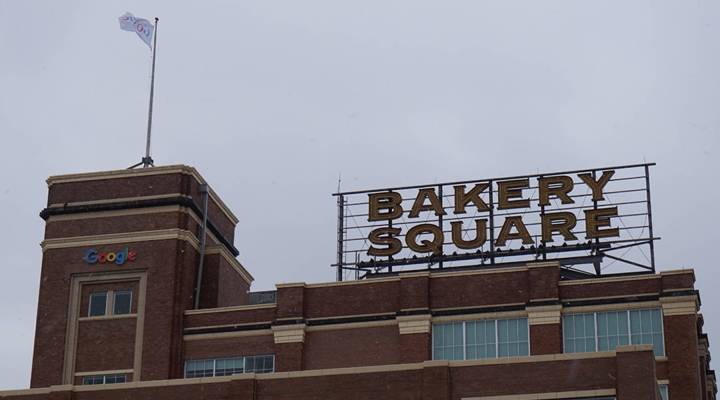 COPY
After Google moved into this Pittsburgh office, luxury apartment building started going up, making the area unaffordable for some who had lived there for years. Erika Beras

After Google moved into this Pittsburgh office, luxury apartment building started going up, making the area unaffordable for some who had lived there for years. Erika Beras
Listen Now

Alethea Sims is a longtime resident of East Liberty, a Pittsburgh neighborhood. A few years ago, Google opened an office not far from there. Luxury apartment buildings started cropping up. She hung signs that read “Black Homes Matter.”

As rents here have risen, Sims has watched some of her mostly black neighbors move to cheaper areas.

At the the local library, Alethea Sims points to a picture of the public housing high-rise where many residents in the East Liberty neighborhood once lived.

The people who can afford that? Tech workers. And nowadays, there are a lot of them here. Amazon has a new office in Pittsburgh, where employees are working on artificial intelligence and language technology. They join other big tech companies like Google and Uber.

“We’ve seen about a 10 percent growth in technology jobs over the last 10 years, and overall, our labor market has only grown maybe 2 percent in jobs,” said Stefani Pashman, who runs a nonprofit that tracks jobs in the region.

Pashman said most of these workers are young white men, and on average, they make one-third more than the average salary for other local workers.

It wasn’t always like this. Alon Lavie is a professor in computer science at Carnegie Mellon University. He said that for years, “As soon as we would graduate these Ph.D.s, there was this big kind of sucking sound that would be all those people moving away from Pittsburgh.”

Alon Lavie has taught at Carnegie Mellon University since the ’80’s. For many years, graduates would leave Pittsburgh for tech jobs in other cities. Now they are more likely to stay.

Now, they’re more likely to stay. Safaba, a company Lavie started, was acquired by Amazon in 2015. He now works at Amazon, along with some of his former students. Amazon’s office is in a well-to-do neighborhood. But where Google and other tech companies are, housing costs have steadily climbed and rentals have more than doubled over the last decade.

“We aren’t like some places where there is nowhere to go,” said Sabina Dietrich, who analyzes demographic changes. She says there are still pockets in the region where people can find affordable housing.

And Pittsburgh’s still cheaper than the Bay Area or Seattle.