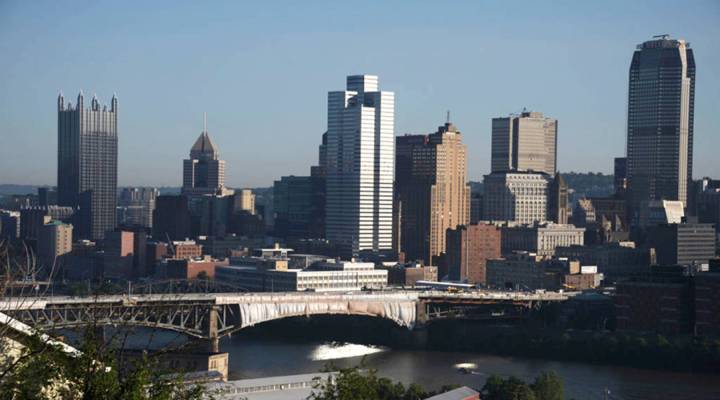 There’s plenty to see in Pittsburgh’s East End. Carnegie Mellon is based here. So is the University of Pittsburgh. And the hip neighborhood, Lawrenceville. Another thing you can find: plenty of construction, mostly apartment buildings with signs touting amenities – pools, gyms, rooftop decks.

A lot of these shiny new buildings have everything but tenants to fill them. “I have passed by apartments where the doors are open and like it’s empty. So I don’t think they’re full,” said Yazmin Dalsimer.  She’s talking about Bakery Living, the building complex where she and her husband Sam rent a one-bedroom apartment. The Dalsimers are in their early 30s.  She’s in education, he’s in tech. They moved to Pittsburgh last year from New York after their rent there topped $3,000 a month. “Over 60 percent of my salary was going toward me just having a place to live,” she said.

Their new apartment, at $1,700 a month, is more affordable. But Bakery Living, with its modern aesthetic, wasn’t exactly what they had in mind. “My first reaction was, ‘no we’re not living here. This is not real authentic Pittsburgh,” said Sam Dalsimer. “This feels very artificial and newly constructed and it’s not what I expected.”

But this is the Pittsburgh that’s been constructed for people like them — the young and techy. More than 12,000 transplants have flooded the city during the past several years to work at places like Uber and Google and in Pittsburgh’s booming health care industry.

After decades of population decline and stalled development, developers were eager to nab all these well-paid renters. And so began the amenities arms race.  “I think all of a sudden, the markets realize that the current housing stock wasn’t meeting what they were looking for,” said Christopher Briem, a regional economist at the University of Pittsburgh. That housing stock he’s referring to: dated apartments in older, neglected buildings.

The vacancy rates for luxury apartments is around 11 percent. And there are thousands more units being built — many of them in neighborhoods where low-income residents are being pushed out. Sam Dalsimer says this is a common conversation at his home. “Are we a force for good or bad in this neighborhood? You know we realize that we’re a part of this process of gentrification that’s happening here,” he said.

Those apartments could go empty because of another economic reality of the New Pittsburgh. It has a tech workforce without a tech real-estate market. In other words, lower rents make it possible to save, and homes are still affordable. Jeesoo Sohn moved here from San Francisco for college. She stayed, working at Carnegie Mellon, then Google. Now she works at another tech company, Duolingo. She lived in one of those luxury apartment buildings and then, “I saw that my rent was very close to what my mortgage would be, potential mortgage. I was like I should buy a house.”

And she did, for just under $400,000. That’s at the higher range — the median home price in Pittsburgh is around $150,000. “My house probably in San Francisco would cost three to four million dollars and I don’t know many 27-year olds who could afford that,” she said.

Now, less than a year into their Pittsburgh lives, Sam and Yazmin are moving again — this time to their own place — an old brick home. And when they move this month, they’re leaving behind another empty apartment.