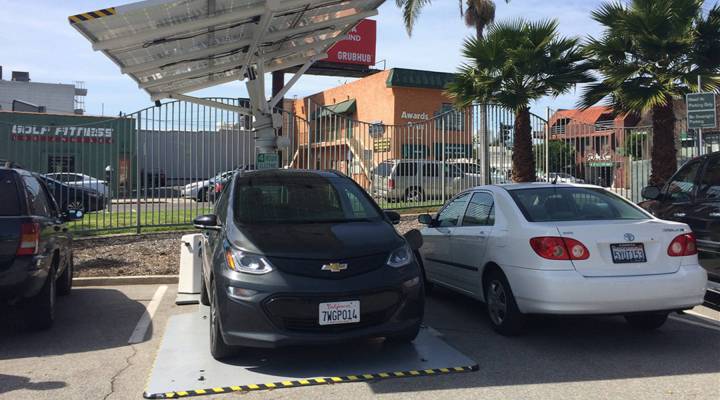 COPY
The EV Arc is a solar array that charges electric vehicles, providing as much as 220 miles' worth of electricity each day. Jed Kim/Marketplace

The EV Arc is a solar array that charges electric vehicles, providing as much as 220 miles' worth of electricity each day. Jed Kim/Marketplace
Listen Now

The push to get more electric vehicles on the road has been hampered by the lack of readily available charging stations. Remedying that problem isn’t a quick fix, since it takes a lot of work to build up the necessary infrastructure. Some are taking advantage of the slow transition to build a business around the need for charging.

On a recent Friday, Desmond Wheatley, president and CEO of Envision Solar, was backing his Chevy Bolt into an EV Arc station in the parking lot of the Rancho Park Golf Course in Los Angeles.

“What we have here is, we have a solar array held aloft above a parking space,” Wheatley said. “It adds some shade for the vehicle as well, which is really nice. You get back in the car, and it’s nice and cool.”

The real draw of parking under the array isn’t the shade but the opportunity for electric vehicle owners to charge their cars for free using renewable energy. Wheatley said the units provide about 220 miles’ worth of power each day.

“It’s the ultimate promise of electric vehicles, right, when we take renewable energy and put them straight into the vehicle,” Wheatley said. “Zero emissions driving and without large infrastructure requirements.”

Desmond Wheatley is the president and CEO of San Diego-based Envision Solar.

Because the arrays are solar powered, they don’t require digging trenches to install electrical lines from the grid. The units can be parked anywhere, and moved, though it takes effort, since each weighs about 9,000 pounds. Wheatley said skipping the permitting process adds untold value to the technology.

“That, by the way, in California, takes between nine to 12 months to deploy a grid-tied electric vehicle charger,” Wheatley said. “We do the same thing in nine to 12 minutes.”

So, what’s the downside? Perhaps price. Right now, each unit runs $50,000 to $60,000. One expert said the value of the electricity generated by the solar panels may not cover the lifetime cost of the batteries.

“It’s pretty expensive, but I would say even now there’s a niche for them,” said Michael Nicholas, a researcher at the Plug-In Hybrid and Electric Vehicle Research Center at the University of California, Davis.

“I think the question is how much does that grow in the future,” Nicholas said. “It really depends on some of the battery cost and how well they can bring down the cost of the existing structures and that sort of thing.”

Wheatley said the price will likely lower as the price of components continues to drop. Even now, though, he said the lifetime value of the units make them cheap compared to the cost of building infrastructure to install a grid-tied charger.

“I have spent up to $600 a linear foot trenching in a previous lifetime,” Wheatley said. “A foot! So think you’re going to go a couple of hundred feet even, which is a short trench run, that can really start to add up.”

The EV Arc provides charging for electric vehicles and can be used as an emergency power source.

It’s likely grid-tied chargers will eventually be ubiquitous. Wheatley said his chargers will still be useful, because they can be connected to the grid and act as battery storage for when excess power is generated elsewhere.

In the meantime, power is already flowing. Truman De La Cruz spent the morning playing a round at the course and was excited to discover he could charge his electric vehicle at the same time.

“Play golf, get your car charged and now ready to go to work,” De La Cruz said. “And I played well!”