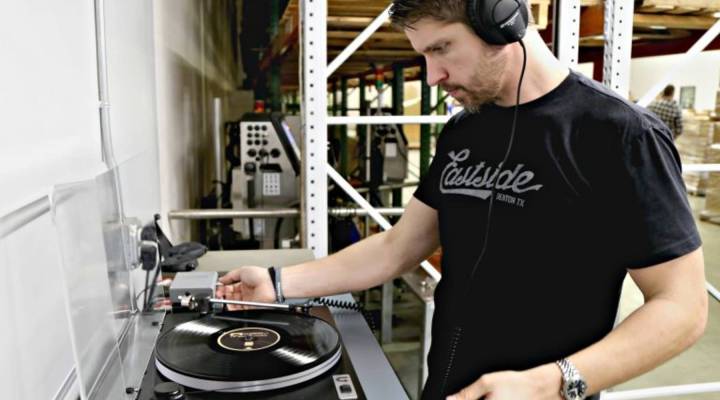 COPY
Dustin Blocker listens to records for imperfections on the floor of the manufacturing facility. Photo: Hady Mawajdeh

Dustin Blocker listens to records for imperfections on the floor of the manufacturing facility. Photo: Hady Mawajdeh
Listen Now

Dustin Blocker is the owner of Hand Drawn Records near Dallas, a label that caters to independent musicians. And recently, Hand Drawn ventured into a new business: It’s manufacturing vinyl records.

Blocker’s presses are inside a giant packaging facility — it’s about the size of two Home Depots. The place is filled with rows of boxes stacked floor to ceiling. In one corner sit two brand-spanking-new vinyl record presses, each about the size of a pickup.

“OK. We’re going to start at the beginning of the process,” Blocker said. “You’ve got your polyvinyl chloride, or PVC. That’s what records are made from … one pound of this makes about three records.”

Before Hand Drawn started pressing records, there were about 18 record-pressing plants in the United States. Most of those plants use machines from the ’60s, but these new presses were built by Viryl Technologies in Toronto, and they’re nearly three times faster.

“The old machines, every minute and a half or so you’d have a vinyl record come off,” Blocker said. “Currently, we can get those down under 30 seconds. Sometimes 20 or 22 seconds.”

It costs about $3,000 to press 500 albums. One of Hand Drawn’s first customers was Texas bluesman Charley Crockett. The company pressed his album “In the Night.

“They do cost some money to come out,” Crockett said about the upfront cost of pressing an album. “But with Hand Drawn, we’re definitely going to be profitable on a limited press of 500.”

Crockett is selling the record for $30 a pop. That may seem pricey, but that’s about average these days for vinyl recordings.

Caulfield said overall sales are down because of streaming apps like Spotify. But David Grover, the owner of Spinster Records in Dallas, said vinyl is special and made for a different sort of listener.

Back in Texas, Hand Drawn’s goal is to press 1 million records this year.