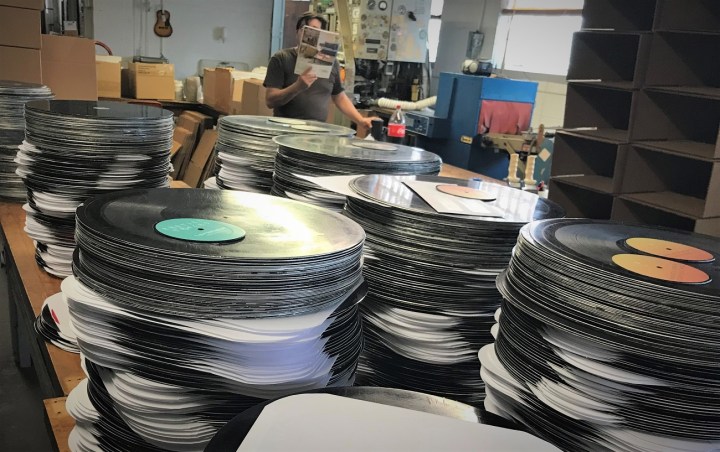 Streaming and downloading music is a multi-billion-dollar business these days, representing around 80% of total music sales. But vinyl records are starting to stage a comeback, and business is brisk once more for the roughly two-dozen pressers now operating in the U.S.

Archer Record Pressing in Detroit, a no-frills, third generation family-owned shop is among the longest surviving. It’s been pressing records for more than 50 years.

Driving by, Archer Record Pressing is pretty easy to miss. It’s a nondescript building tucked alongside machine shops and auto part makers on Detroit’s east side.

There’s a steady hiss from the back half of the shop. It’s Archer’s steam boiler.

“That’s the boiler, yeah, it sounds like I’ve got a gasket that just sprung a leak,” said owner Mike Archer. “It’s always something! I’ll be fixing that here shortly.”

Archer’s grandfather opened for business in this exact location in 1965 using the same types of machinery his grandson has in operation now.

That boiler generates steam for a fleet of automatic vinyl pressers capable of producing about 10,000 records a week, about as much as Archer can press. A minimum order of 200 records costs around $800. More, if a client wants colored vinyl or other options.

On Archer’s workshop floor it’s all dirt, grease and noise; a three-person factory that presses eight hours a day. The whole process starts with little bits of polyvinyl chloride; colored pellets about the size of small marbles.

“Yep, that’s how it starts and then it gets melted in an extruder,” Archer explained.

When Archer first opened, it was pressing some of the most beloved music to ever come out of Detroit, including the 1969 debut single from George Clinton’s Funkadelic, “Music For My Mother” and scores of gospel, R&B, rock n’ roll and even corporate jingles for area companies.

A lot of records pressed at Archer are now coveted by record nerds. But Mike Archer says the business never appealed to him as a kid.

“You know, I liked music. But no, I didn’t like making records,” he laughed. “This is hard work, actually, you know, there are easier ways of making a living.”

When Archer agreed to help his dad out at the shop in the early 1990s, he was working in auto manufacturing and he’d grown weary of that business.

At the time he didn’t understand who’d even be buying records after cassettes and CDs had long eclipsed LP sales. But Archer survived, thanks in part to niche, underground music scenes.

“We were doing a lot of work for hip-hop artists and dance music, especially here in Detroit; the techno music,” said Archer.

Brian Lackner, a local artist who raps under the name Mister, stopped by Archer to collect copies of his freshly pressed debut album “Approaching Land.”

“There’s been such respect for Archer from throughout the years, I felt like if I was going to have a release in Detroit, Archer is without a doubt where I was going,” Lackner said.

He could have gone across town to Grammy-award winning rocker Jack White’s Third Man Pressers, which opened in 2017. Third Man also has a performance space attached to a small studio with a mixing board and record lathe. Live performances there can be recorded straight to the lathe recorder to create a master recording used to press records.

Nationwide in 2018, vinyl record sales topped $419 million according to the Recording Association of America, the biggest sales since 1988.

“One is that there are younger, new generations that have only known digital technology, so this feels new to them,’’ said Third Man’s operations chief Roe Peterhans.

“And there’s also the generations that remember it and have reverence for it and are really interested in getting back to the tactile medium.”

Even in the age of streaming and digital downloads, fans who prefer vinyl are willing to shell out anywhere between $20 and $40 for a new album. They’re boosting sales so much that vinyl is now close to overtaking the innovation that nearly destroyed it; the digital compact disc.