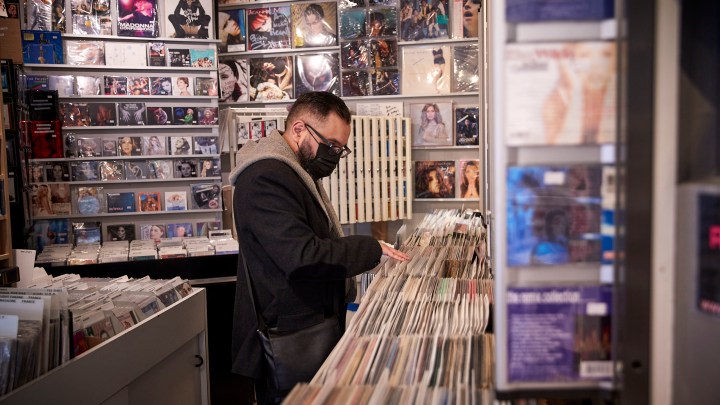 COPY
A shopper browses through vinyl albums in Paris, France's Lucky Records Store in March 2021. Vinyl sales have skyrocketed over the past year. Kiran Ridley via Getty Images

A shopper browses through vinyl albums in Paris, France's Lucky Records Store in March 2021. Vinyl sales have skyrocketed over the past year. Kiran Ridley via Getty Images
Listen Now

Sales of vinyl records have been rebounding for years, but during the first half of this year, they went to a whole other level: up 94% over the same period last year, when they happened to top CD sales for the first time since 1986, according to the Recording Industry Association of America.

Fleetwood Mac’s “Rumors” is one of the top-selling albums of all time. These days, Fabio Roberti is having a hard time finding vinyl copies. “It’s unavailable for months and months and months. It’s crazy. I’ve never seen anything like it,” he said.

Roberti owns a record store in Brooklyn called Earwax Records. Buyers don’t just covet classics like The Beatles and David Bowie, he said. Artists from the ’90s and early 2000s are hard to find.

Part of this is because there aren’t many vinyl pressing plants left in the U.S. It’s also because of their increasing popularity, even among fans of Billie Eilish, Olivia Rodrigo and Taylor Swift.

“Folks are often surprised that a lot of it is driven by younger people who don’t have any experience at all with physical music consumption,” said Marc Hogan, a staff writer at the music site Pitchfork. Gen Z has mostly grown up with streaming, he said, so vinyl has novelty value.

“That feeling of putting the needle down on the groove. There’s that kind of appealing little hiss, which is an imperfection, but we’ve kinda grown to love imperfections when everything is digitally perfect,” he said.

Artists and music labels love vinyl, too. “Vinyl albums typically sell for $20 to $30. You know, digital downloads, the entire digital download might be $12 or $13. Of course, the royalties are fractions of a penny for streams,” said Marcus Thomas, a professor of music and performing arts management at the University of Hartford.

Physical album sales aren’t about to top streaming, which makes up more than 80% of the recording industry’s revenue. But for most popular artists, Thomas said that’s just fine.

“I don’t think that it’s all necessarily profit-motivated,” Thomas said. “It’s an excellent way to connect with fans in a way that the completely digital format just does not allow you to do.”

Artists release special edition albums with bonus songs and pull-out posters, and fans put record covers on their walls, proving that everything old is new again.

Correction (Sept. 20, 2021): A previous version of this story included a link to the wrong data from the Recording Industry Association of America. The link has been updated.