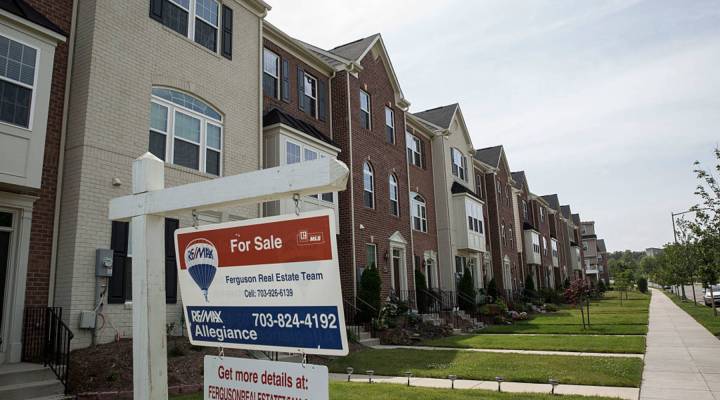 The election of President Trump has added uncertainty to the already speculative market that is low-income housing development.

Over the past 30 years, the Low-Income Housing Tax Credit program has created millions of units of affordable housing across the country, though still not enough to meet demand.

Trump has yet to make good on his campaign pledge to cut corporate tax rates, but even the prospect of corporate tax cuts is affecting the market for low-income credits.

“They’ll be 96 units here, all of them financed with the low-income housing tax credit program,” said Bill Whitman, a partner with Somerset Development, which owns Portner Flats, a new-construction apartment building in Washington, D.C.

In a city where the cost of rent is rising exponentially, this project will be reserved for families making below AIM or the “area median income.” Compare that with another construction site across the street.

“The average rents in that building are expected to be $5.38 a square foot,” Whitman said. “Whereas the rents for the affordable units in this project will be $1.75 a square foot.”

In other words, these apartments will be rented more than three times below market rate. This is possible because the credits awarded to investors allow a dollar-for-dollar credit against their federal taxes in exchange for funding affordable housing. Without the credits, Whitman said regular people could never afford to live here.

“The low-income housing tax credit program is critical, it’s essential,” he emphasized, “it’s the ‘but for’ in projects like this. Without it, this doesn’t happen.”

However, if corporate tax rates are cut from 35 percent down to 20 percent or 15 percent, as Trump wants to do, you also cut the demand for a credit.

“We’ve already seen the prospect of tax reform have a meaningful impact on the price that investors are willing to pay,” said Paul Weissman, director of affordable housing lending for the Hunt Mortgage Group.

Weissman said investors are already valuing the credits 15 percent to 20 percent lower. If you factor in rising interest rates, which makes lending even more costly, the overall impact is potentially much greater.

“Because you have projects that are no longer viable that before were viable,” Weissman said.

Some 100,000 new units of affordable housing come into the market nationally each year. Unfortunately, it’s nowhere near enough, said David Godschalk of Telesis.

“The challenge is that this is coming at a time when demand for affordable housing, particularly demand for housing for very low-income families, is growing.”

Telesis is a developer specializing in affordable housing projects in urban areas.

Since the Great Recession, Godschalk said rents have risen much faster than incomes, creating a supply shortage of around 4 million units.

Units in Portner Flats, and affordable housing project, will rent for $1.75 a square foot, while the rents at across the street are expected to be $5.38 a square foot, Whitman says.

“As an example, if we build a hundred thousand units of tax credit housing every year, even if we were to double that, we could build at that pace for the next 20 years and still not fill the current gap,” he said.

If tax credit values tank, that means projects would need to find some kind of gap financing. Another solution would be to simply sell more credits.

“If we put more credit into the marketplace, more of those projects could be built,” said Democratic Sen. Maria Cantwell of Washington.

Together with Republican Sen. Orrin Hatch from Utah, the two have drafted a legislative solution called the Affordable Housing Credit Improvement Act, which aims to expand funding for affordable credits by 50 percent or perhaps less.

“Maybe if we’re out there on the Senate floor and somebody said, ‘Oh, how about 30,’ and we could get it done, we might end up at a different point,” Cantwell said.  “I definitely think you can justify the demand for this.”

Cantwell said the act would create or preserve around 1.3 million affordable homes over 10 years and build another 400,000 than is possible under the current program.