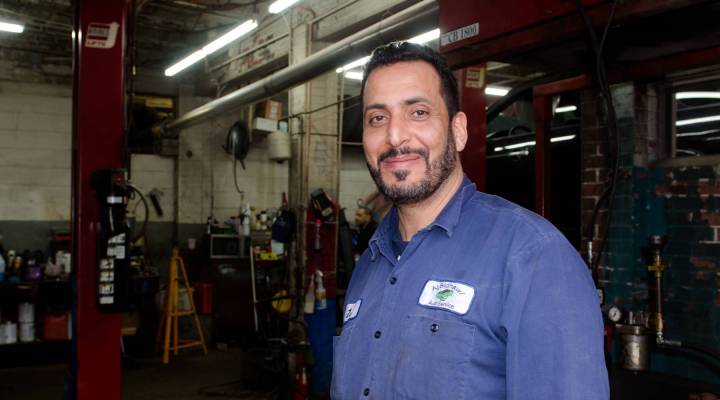 COPY
Saad Albidhawi, a long-time mechanic, is part of the reason there are now more than 10 Iraqi-owned auto shops in Erie. Caitlin Esch/Marketplace
The Big Promise

Saad Albidhawi, a long-time mechanic, is part of the reason there are now more than 10 Iraqi-owned auto shops in Erie. Caitlin Esch/Marketplace
Listen Now

Saad Albidhawi – whom everyone calls Al – has been fixing cars in his shop in Erie, Pennsylvania, since 1998.

Back then, he was in his 30s, a new Iraqi refugee living with his two brothers. He said to open his garage, he needed three very basic things:

“The money and the language and the help from other people.”

Albidhawi said the money came from his previous job as a truck driver; the language came from his one-on-one classes; and the help took many forms, including recommendations from the electrician next door, who sent Albidhawi his first customers.

Now, two decades later, he’s married with three children and he’s the one offering the help.

More than 10 auto shops in Erie are owned by Iraqis, and many of them worked closely with Albidhawi.

He taught them to fix cars. But that wasn’t all. He also helped them learn how to start a business, where to buy equipment and which permits and licenses they would need to apply for.

And because it can be hard for immigrants to establish credit and borrow money, many Iraqi immigrants lean on each other for that too.

“No interest, no fees, no nothing,” Albidhawi said. “Just when you finish, you don’t need stuff like a year or a year and a half, bring it over.”

One of the guys Albidhawi helped is a 38-year-old Iraqi mechanic Wael Alassedy. As he rummaged through papers, he said  business can be pretty up and down.

He said on slow days, “You can’t find anything to do just to get your day to pass by, and some days, no, you can’t even itch your head because of how busy you are.”

Alassedy arrived to San Diego as a refugee in 1996. Eventually, he moved to Erie, before moving back to San Diego, then back to Erie. He said he likes it here, because it’s small and quiet.

“Although sometimes I miss San Diego – the big freeways, the nice weather,” he said. “Other than that, I’m okay.”

Like a lot of manufacturing towns with struggling economies, Erie has watched its population decline over the years. At the same time, it’s embraced immigrants and refugees, which make up about 20 percent of residents, including about 3,000 Iraqis, according to the International Institute of Erie, a refugee resettlement agency. Erie City went for Hillary Clinton in the election.

The surrounding county, however, voted for President Donald Trump. Alassedy said he hates the administration’s push to keep refugees and immigrants out.

“They’ve been through so much and being banned from coming to the U.S. and get the help they need, that’s terrible,” he said.

But Alassedy would prefer not to talk about politics. He’d rather direct attention to his friend’s new butcher shop, not far away.

Wael Alassedy arrived to San Diego as an Iraqi refugee in 1996. For the last seven years, he’s been running an auto repair shop in Erie, Pennsylvania.

The store is an interesting mix. Arabic blares from the TV, which shares the wall with reminders of Erie’s hunting culture: two mounted deer heads. In the back, co-owner Haydar Al Kofi shaved pieces of meat for shawarma sandwiches off a large spit.

Earlier this year, Al Kofi was even able to expand his store to add things like jewelry, rugs and glassware.

And Saad Albidhawi, who used to do construction work in Iraq, built the addition. He gave Al Kofi a pretty solid deal – a 75 percent discount.

“Somebody is going to want to open that store, it doesn’t matter who,”  Albidhawi said. “So, I’d rather to see somebody I know be there, so I can lean on him if I need something. That’s how it works – I help you, you help me.”

And the Iraqi network keeps getting stronger.