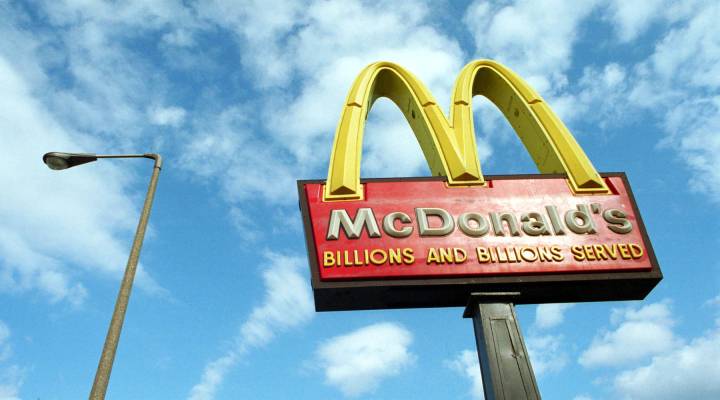 “Twitter notified us that our account was compromised. We deleted the tweet, secured our account and are now investigating this,” a McDonald’s spokeswoman told Marketplace. The company later tweeted out the statement as well.

McDonald’s later issued a statement clarifying what went wrong: “Based on our investigation, we have determined that our Twitter account was hacked by an external source. We took swift action to secure it, and we apologize this tweet was sent through our corporate McDonald’s account.”

The tweet, which was addressed to the president’s personal twitter account, read: “You are actually a disgusting excuse of a President and we would love to have @BarackObama back, also you have tiny hands.”

The McDonald’s account posted the tweet at about 9:16 a.m. ET. It was also briefly pinned to the account’s page — making sure it was the first thing that anyone visiting the McDonald’s Twitter page would see. The tweet was removed within 20 minutes of being sent.

Despite the company’s statement that the account was compromised, a number of Twitter users and Trump supporters began tweeting out the hashtag #boycottMcDonalds. Other companies that have been previously boycotted by Trump supporters include Nordstrom, Starbucks and Budweiser.

The fast-food giant has, however, also said it’s been affected by the contentious election. Back in July 2016, Easterbrook said that uncertainty about global politics and economy affected consumers’ appetites. His comments came right after the United Kingdom voted to leave the European Union and just before the Democratic and Republican national conventions.

“There is a broader level of uncertainty in consumer’s minds at the moment both trying to gauge their financial security going forward whether through elections or through global events, people are certainly mindful of an unsettled world,” said Easterbrook, adding that uncertainty causes people to hold back on spending.

He echoed those comments after Trump was elected, noting that uncertainty was likely to continue throughout Trump’s transition.

“No one likes uncertainty,” Easterbrook told CNN in November. “The sooner we get through this period, and there’s some clarity as to the way things are going to go forward, we’ll be able to make the long-term decisions of business — just the same as consumers and families.”

This post was updated at 5:50 p.m. PST to reflect a statement from McDonald’s.