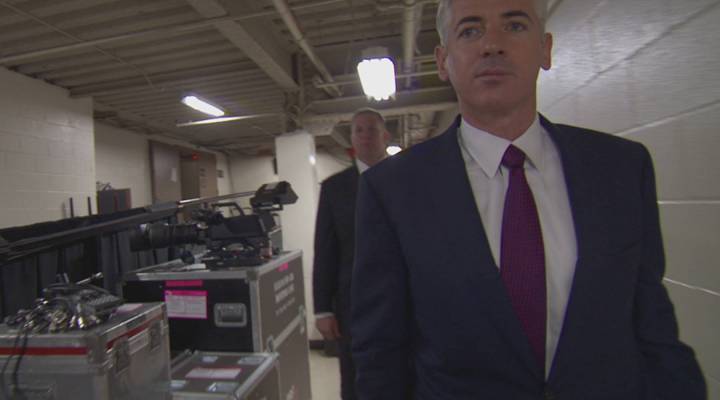 Investor Bill Ackman and his company Pershing Square Capital Management lost $4 billion on Monday by selling its stake in Valeant, the controversial pharmaceutical company. But this isn’t the first time that Ackman has taken a big stake in a company that didn’t turn out well. Before Valeant, Bill Ackman made a billion-dollar bet against the nutrition and weight-management company Herbalife. He accused Herbalife of operating a pyramid scheme and attempted to short Herbalife’s stock. This story is now the subject of a documentary “Betting on Zero.” Marketplace host Kai Ryssdal talked with Ted Braun, the director of the film. Below is an edited transcript of their conversation.

Kai Ryssdal: Tell me why this story, which is kind of down in the weedy Wall Street-y kind of stuff. Tell me why the Bill Ackman Herbalife story got you.

Ted Braun: I was intrigued by two elements right from the outset. Bill Ackman — hedge fund, Wall Street titan, donning a white hat and going on a moral crusade. That’s not something you expect every day. Then, Herbalife, allegedly a massive, multibillion dollar, New York Stock Exchange listed, pyramid scheme. And I thought, regardless of the outcome of this battle, something unexpected was going to happen, and audiences would be surprised, and I would as well. And I haven’t been disappointed.

Braun: As he said publicly and as he says in the film, he invests money on behalf of a fund of investors that he has. And he I think has come to the judgment that this is an investment which is ultimately going to be profitable for him. There is, however, another dimension, which is a sort of moral conviction, that he is bringing to light a massive problem, and that moral dimension to his crusade I think has given him an additional fuel, and has helped keep him and his investors in this fight for much longer than I think a lot of people expected.

Ryssdal: This is not an original thought of mine, and in fact somebody in your film says it, one of Ackman’s investigators says it: Why would you ever take a moral issue to Wall Street?

Braun: I think he believes that by bringing this issue to Wall Street, he will also bring it to the attention of federal regulators, which I think in fact happened.

Ryssdal: Yeah, not to spoil the end of the film, but it has happened, right?

Braun: Oh yeah, it has happened, is a public fact. Yeah, the Federal Trade Commission conducted a two-year investigation, sort of paralleling the time of production. But I think also he felt that, when the facts came to light, and that when the government finally weighed in, the markets would respond. I think he was using the forum and the muscle that the fight on Wall Street has to provoke a public reaction as well as a regulatory reaction.

Ryssdal: Can’t talk about Ackman and Herbalife without talking about Carl Icahn and the titanic — for lack of a better radio-friendly phrase — spitting contest that those two engage in over Akman’s short and Icahn buying in to the stock in a very big way.

Braun: It was one of the most colorful moments, I think, in the history of business television.

Ryssdal: Which is saying something, by the way.

Braun: It is saying something. Yeah.

Ryssdal: It’s CNBC, and those two are on the phone and literally yelling and screaming at each other.

Ryssdal: Come on, you guys.

Braun: That’s the reaction that a lot of people had while they were watching this unfold. It isn’t in the film, but in the audio from the television broadcast, you can hear behind Scott Wapner, who’s broadcasting, behind the CNBC guy, you can hear traders groaning as though they’re witnessing a boxing match in which the combatants are delivering death blows. It’s a very colorful moment. But, I think for a lot of people in the context of how many lives are being affected by this battle, it’s a fight that, as entertaining as it is, raises some questions about the effects of their actions on ordinary Americans.

Ryssdal: By the end of the film, Herbalife has been sanctioned, Akman still has his short on, Carl Icahn has been, as of this past December, appointed to President Trump’s regulatory Advisory Council. Do you suppose Akman would think it’s all been worth it?

Braun: You’d have to ask him. He said some interesting things publicly. He said that this is probably the last big public short that his fund Pershing Square will engage in. He said it’s just not worth the brain drain, in other words, the amount of energy and time that his firm has to commit. That said, he maintains a short position and he continues to say, you know, regardless of whether the firm continues investment, he’s going to continue to work to bring Herbalife down.

Ryssdal: So, it’s a film called “Betting on Zero” by Ted Braun. He teaches at USC when he’s not making movies like this. It’s a good show. It’s a fascinating film. Thanks, Ted.