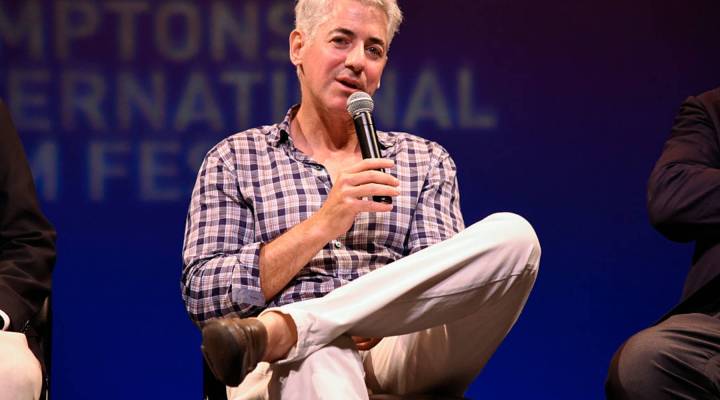 On November 7, there’s one corporate meeting that all of Wall Street seems to have their eyes on: the board meeting for ADP, a payroll processing company. Bill Ackman, the activist investor who runs a hedge fund call Pershing Square Capital Management, bought up a chunk of ADP and decided to seek some changes in how the company has run. That hasn’t gone over too well with the ADP’s leadership, and now he’s running against some of the company’s directors in a shareholder election. If it sounds dramatic, well, it sort of is — and that’s exactly Ackman’s M.O. Known for his mixed success as an activist investor at JCPenny’s, Target, and Chipotle — as well as his famous short of Herbalife — Ackman sat down with Marketplace host Kai Ryssdal to talk about his career as an activist investor. The following is an edited transcript of their conversation.

Kai Ryssdal: There are a zillion companies out there that you could have decided to invest in, and take a stand on. Why ADP?

Bill Ackman: ADP is a great company. It’s been around almost seven decades and in the first six decades it was really a dominant company in the space. But what’s happened in the last decade is the company’s become a bit lethargic and inefficient, and there’s a big opportunity to improve the company’s profitability by reducing costs and operating more effectively and efficiently.

Ryssdal: You have found yourself now in a spitting contest with Carlos Rodriguez, the CEO of ADP. If you win on November 7, and get these three boards you’re looking for, how do you expect that to go?

Ackman: I think it will go well. I mean, you know, unfortunately we ended up in a proxy contest here. It was not our plan or intent. And usually when proxy contests happen, it’s more for emotional reasons on the part of the company than really economically rational reasons. So what we’re trying to do here is help restore ADP to the greatness and position it had many years ago, and that has a very important impact on all of the employees and the customers the company serves.

Ryssdal:You’ll understand if I point out here that you’re portraying yourself very much as the white knight.

Ackman: Yeah, I think we are. You know, we’re not looking to take over the company. I would say we have a groundswell of support from shareholders who are very open to the idea of this company running itself more efficiently and are very concerned about the fact that ADP has lost a huge amount of market share in their so-called enterprise business. And ADP has has not yet come up with a product to compete with these new entrants, and it’s a grave threat to the company.

Ryssdal: Let me change gears here for a second, and ask you this question: if I call you an activist investor, is that an insult?

Ackman: You know, if you think about what’s happened to corporate America, it used to be that 150 years ago, the Carnegies and the JP Morgans and the Vanderbilts of the world were major shareholders of companies. And when those businesses under-performed, they made changes to the management and the boards, and they kept them focused. It’s really the activists that have kind of replaced the J.P. Morgans and the Carnegies of the world in the sense that we’re buying large stakes in companies, we have very concentrated positions and we care enormously about this business and how it’s going to perform over the long term. That’s the basic idea, and I think it’s an honorable mission.

Ryssdal: Can’t get Bill Ackman on the phone and not ask him about some of your less-successful ventures: Herbalife is one. Valeant, this year, is another. I wonder if you are looking for a win after what’s been a rough go for you?

Ackman: Sure, so while I’ve got you on Herbalife, it’s an important one. Herbalife is a company causing enormous economic harm to the citizens of this country and to 95 other countries around the world. And we, as an activist in this case, sounded the alarms about the business. That led to, and we’re short the stock, which means we’re betting the stock will go lower.

Ryssdal: To the tune of a billion dollars. I mean, you know, we did — there was a documentary that you participated in called “Betting on Zero” with Ted Braun at USC. We did that interview, and we told that whole story.

Ackman: Yes. And so my point here is, just go to the Herbalife story. I view Herbalife as an enormous success because we’ve surfaced the harm the company has caused. We catalyzed the FTC to investigate the company, and the government has fined the company $200 million, and we think it will ultimately collapse. Now as an investor, we’ve lost money because we shorted the stock. The company has purchased about 35 percent of the outstanding shares. Carl Icahn, another twenty-odd percent of the outstanding shares and that’s a pretty good job holding the stock price up. But that’s a temporary phenomenon. But I think our activity here…

Ryssdal: You hope, you hope. Come on. You’re a billion dollars into this. You better believe you hope it goes down.

Ackman: We certainly believe. But my point here is, these are are good-for-America type investments. Let’s talk about the bad-for-America situation. So the Valeant investment was a case where we made the mistake of being a passive investor in the company, which is not what we normally do. And we made a bet on the management of the company to do the right thing. And management did not do the right thing. Among other things, they massively overpaid for an acquisition. They marked up the price of a couple of drugs by very large amounts, attracting appropriate congressional scrutiny and scorn. They massively damaged the reputation of the company, and it caused the stock price to collapse, and we lost 85 percent of our investment in the company.

Ryssdal: Or $4 billion, for laymen.

Ackman: A huge amount of money. Enormous amount of money, and I incredibly regret it. What we did subsequent to that, though, is I joined the board of the company. And I led the decision to fire the CEO in the first weekend I was on the board. I helped recruit a new CEO named Joe Papa who is an honorable, ethical, capable executive. The company has 28, 29 thousand employees, and we did, I think, a very good job stabilizing the business, at which point I left the board of the company. So again, a disastrous economic investment for me, and of course we’re always looking for wins. But I think again there, we’re on the right side of of fixing problems. And we’ve had a couple of — certainly one big loss in the short term — and when we lose money, we lose big because everything we do is big. But, when you’re concentrated, and if your batting average is high, you can do very well. Although it’s a lumpier ride to success than a smooth ride to success.

Ryssdal: To that point of you portraying yourself as something of a white knight, I wonder why you take these moral crusades to Wall Street, which fundamentally doesn’t care about moral crusades?

Ackman: You’re correct about that. Wall Street certainly doesn’t care. And the goal… You know, our theory is: this business is hard enough. You want the tailwind of doing what is in the best interest of the country. What is in the best interests of the company on a long-term basis? Because without that, you know, life’s much more difficult. And the vast majority of companies in the U.S. today are really controlled by what I would describe as permanent owners of stock. Think index funds like Blackrock. So, they truly do care about the business over the next 10, 20, 50 years. So the only kind of changes in campaigns we’re going to run are ones that benefit the business over decades, and those are the only kind of campaigns you can win. If you have some kind of short-term strategy to make money that’s harmful to the company long-term, you’re not going to get the support of the Blackrocks, the vanguards and the others. And if you’re going to short a stock on the other side of it, why not take on a company that’s causing enormous economic harm, and misleading people, and violating the law? And we can do so by being fiduciaries for our investors, because that fact has historically, in my experience, been very, very helpful to us in being successful.

Ryssdal: I called you an activist investor. You said that was an honor. I need you to explain to the mechanic in Cheboygan or the software engineer out in Silicon Valley someplace or some guy just trying to get by in this economy what your value add is to the American economy.

Ackman: And you know a good one is that we can help prevent the next Kodak from disappearing. Where tens of thousands of jobs are lost by waking up a complacent company to the competitive threats it faces and the inefficiency that has crept into their business because of complacency. And, you know, it’s activism in the in the public shareholder realm. It’s not dissimilar to political activism where someone with a relatively small number of votes gathers the votes of other constituents to put forth a plan to address some kind of problem or inequity. And this is what we are doing in the public stock market realm — we’re doing it with a financial goal because the only way we’re able to raise the capital from our investors to pursue the strategies is that we can’t guarantee the returns. This is a strategy that can be very very rewarding for investors. So, I like investments where our interests are aligned with the country and where our economic interest allows for us to see if we can if we can make ADP a more successful and more efficient company. The stock price is going to go up.

Ryssdal: Bill Ackman is the CEO of Pershing Square Capital Management. The vote on ADP, by the way, is the November 7. We’ll let you know how it goes. Bill, thanks a lot. I appreciate it.

Ackman: Thanks so much.