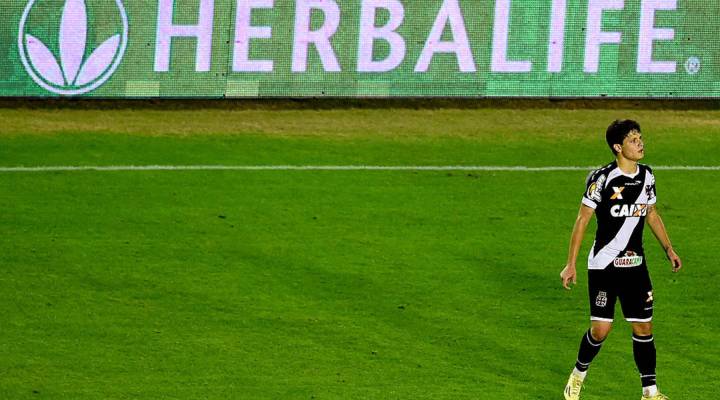 COPY
The Herbalife logo can be seen at during a match between Vasco da Gama and Ponte Preta as part of Copa do Brasil 2014 in 2014. The company has agreed to pay $200 million to compensate consumers as part of a settlement with the Federal Trade Commission. Buda Mendes/Getty Images for Herbalife

The Herbalife logo can be seen at during a match between Vasco da Gama and Ponte Preta as part of Copa do Brasil 2014 in 2014. The company has agreed to pay $200 million to compensate consumers as part of a settlement with the Federal Trade Commission. Buda Mendes/Getty Images for Herbalife
Listen Now

Herbalife, the controversial nutrition-supplement company, has reached a mammoth settlement with the federal trade commission – one of the FTC’s largest. The company will pay $200 million and change some aspects of how it operates.

For years, Herbalife has been battling accusations that it’s a pyramid scheme.

“I’m not saying they’re not a pyramid scheme,” said Edith Ramirez, chairwoman of the FTC. She isn’t saying Herbalife is a pyramid scheme, either. What the FTC alleges is that the company deceived people. “Herbalife misled people into believing they could make lots of people by selling Herbalife products and we contend that was actually not the case,” Ramirez said.

The company promised that sellers who got into the Herbalife business could get rich. In fact, according to the FTC, it cost people $3,000 to $8,500 to get into the program, but they made on average just $300 a year.

“You have a compensation structure that emphasizes the purchase of product and the recruitment of others rather than selling product to end users,” said the chairwoman.

In a statement, Herbalife said that many of the allegations by the FTC are factually incorrect, and that the company is paying the $200 million settlement only because continuing litigation would be distracting and costly. The statement quoted Chairman and CEO Michael Johnson as saying “the settlements are an acknowledgment that our business model is sound and underscore our confidence in our ability to move forward successfully, otherwise we would not have agreed to the terms.”

As part of the settlement, Herbalife will have to reward sellers mostly based on actual retail sales, not just how many other sellers they recruit.  The company will also have to keep track of retail receipts, which it hasn’t done in the U.S.

“They do this in China right now,” Ramey said. “The changes are not extremely onerous.”

Unless of course Herbalife doesn’t really have many retail sales. In that case, the settlement would be the company’s undoing.