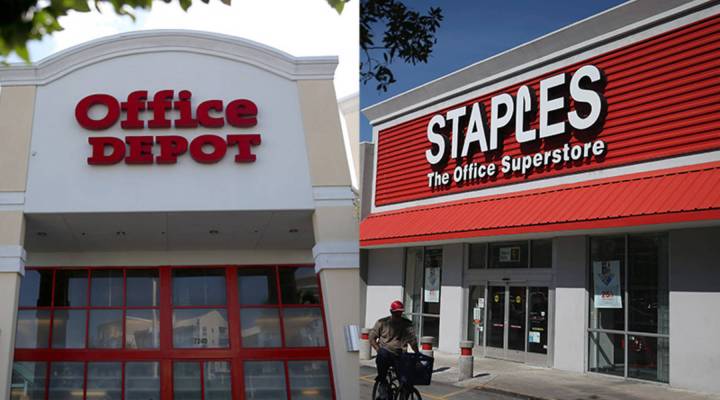 COPY
The merger between Staples and Office Depot is valued at $6.3 billion. Joe Raedle/Getty Images (L and R)

The merger between Staples and Office Depot is valued at $6.3 billion. Joe Raedle/Getty Images (L and R)
Listen Now

Staples and Office Depot face anti-trust lawyers for the Federal Trade Commission in U.S. District Court on Monday. The companies are fighting to complete their $6.3 billion proposed merger — an acquisition by Staples that follows Office Depot’s acquisition of competitor Office Max. The FTC argues that allowing the remaining no. 1 and no. 2 office-supply chains in America to hitch up will create monopoly market conditions and restrict competition.

Last week, the CEOs of Staples and Office Depot issued an open letter saying the FTC’s analysis is “flawed” and reflects “a deep misunderstanding of the competitive landscape.” They argued that after they merge, they will still face significant competition to sell office supplies at the lowest price, and promised that they will pass those savings on to customers.

Efraim Levy, equity analyst at S&P Global Market Intelligence, agreed with the CEOs’ assertion that the market for office supplies has been transformed in recent years by ubiquitous online-commerce opportunities.

“You just have to make an electronic click on your screen,” Levy said. “If Staples or Office Depot or the combination doesn’t have the best prices compared to Amazon or others, consumers have an easy opportunity to make their purchases elsewhere.”

However, attorney Mark Ostrau, who chairs the anti-trust practice at Bay Area law firm Fenwick & West, said the FTC’s objections to the merger aren’t focused on regular consumers, or small- and medium-sized business customers, in the market for office supplies.

“The concern is that a certain class of customer — large national buyers — doesn’t have the same alternatives,” Ostrau. “It’s not just the products, but it’s the whole package of service and support and national distribution networks that they are accessing.”

Ostrau said the FTC doesn’t want the number of major competitors for those big corporate purchasing contacts to shrink down from two big office suppliers, to just one. And he pointed out that the FTC has blocked other proposed mergers in the past year on similar grounds: GE’s appliance division and Electrolux over concerns about competition in the market for appliances supplied to home builders, and Sysco and US Foods over concerns about competition among suppliers to big national food-service companies.