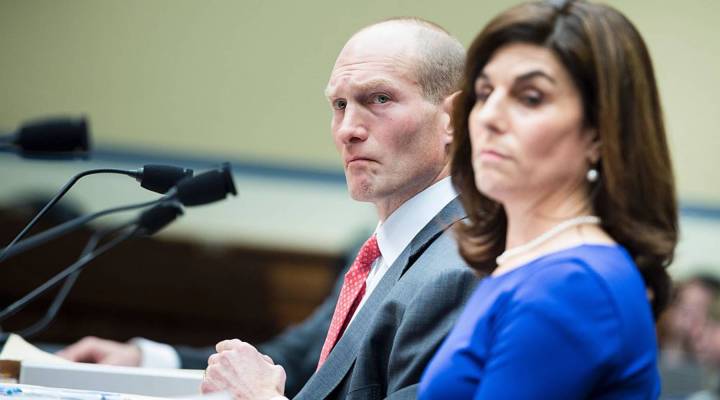 In 2015, Valeant Pharmaceuticals was at the top. The business was valued at $90 billion and centered on the cult of personality of then-CEO Mike Pearson. But now it’s all one big, hot mess.

The company is in the midst of a several federal and state investigations for price gouging, and its Wall Street backers are scrambling to salvage their investments and reputations.

Bethany McLean, contributing editor at Vanity Fair, wrote the story for its summer issue, out now.

McLean on the power of Mike Pearson:

What’s fascinating about Mike Pearson is how he became such a cult leader with supposedly very smart investors on Wall Street. He’s an unlikely cult hero, in that he didn’t seem like the master-of-the-universe type that these sort of guys would normally follow, and yet he exerted this strangely powerful hold over his many, many followers such that even when it was obvious to outsiders that the business wasn’t what it was cracked up to be, these investors who followed him just simply couldn’t see it.

On how Valeant’s price gouging worked:

Wilson’s disease is a disease where you can’t properly metabolize copper, and it’s fatal. You die of either liver disease or neurological conditions. It’s not pleasant. A British pharmacist in the 1950s came up with two pretty simple drugs to treat these diseases — he was just monkeying around, this wasn’t some big, elaborate million dollar R&D process — called Syprine and Cuprimine. And for years, Merck, the big pharmaceutical giant, owned these drugs and sold them for a dollar a pill. And then Merck sold these two drugs to another firm, who then in turn sold them to Valeant, and Valeant began to hike the price of the drugs. Today one of them, Syprine, is about $300,000 a year. That was sort of Mike Pearson’s argument: Because people need these drugs to live, either the people or the insurance system will pay any amount to keep them alive. Because, ‘Hey,  it’s cheaper than liver failure.’ Although now it came out in recent congressional testimony that actually the cost of a liver replacement is cheaper than the cost of Syprine.

Click the audio player to listen to the full interview.