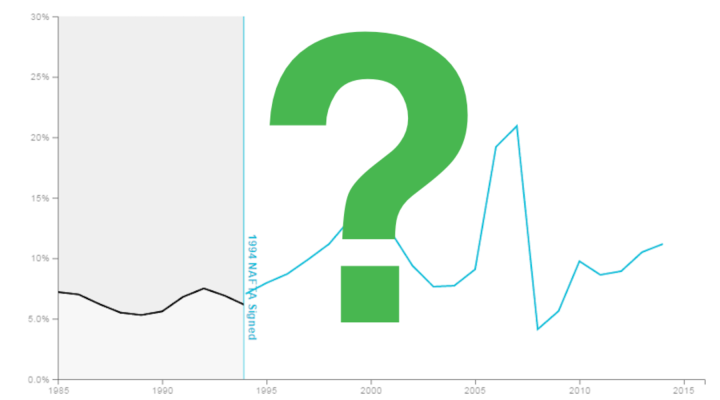 At the time, the bill was lauded for its ability to create jobs in the U.S. — Clinton had said NAFTA would create 200,000 jobs within two years — increase cooperation between the three countries and lower prices in the U.S. Twenty-three years later, the trade agreement is blamed for crippling manufacturing and lowering salaries in the U.S.

How has the U.S. economy changed since NAFTA was established? Use your mouse or touchpad to draw how unemployment and trade have moved in the last 23 years.

In January 1994, the U.S. unemployment rate was 6.6 percent. How has it moved since? Draw what you think and when your line reaches the end we’ll show you the answer.

In 1993, the U.S. exported more goods than it imported from Mexico and had a trade surplus of $1.6 billion. How has the trade balance moved since?

Economists like to argue whether trade deficits are as bad as they look. One estimate says 682,900 jobs were moved to Mexico because of the trade deficit, but costs for goods are cheaper, which helps consumers, and, maybe more importantly, it’s now easier to find tequila.

In 1994, the U.S. and Canada traded $242 billion worth of goods. How much is traded between the two countries now?