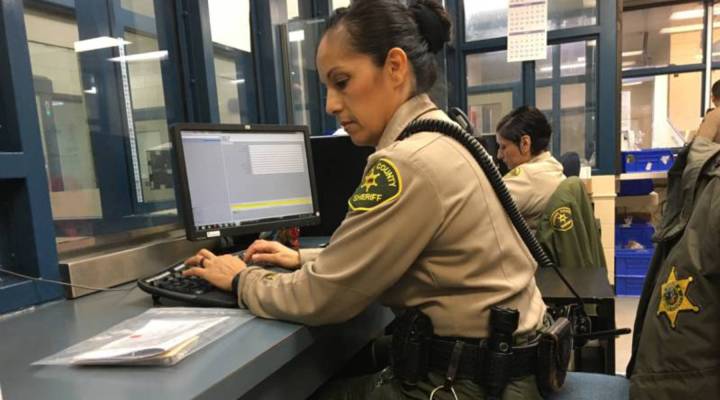 At the Fresno County Jail, Sgt. Elisa Magallanes walked a newly arrested man from a holding cell to a small locked booth where she books him. She talked to him through a glass barrier with a small window in it.

“Where were you born at?” Magallanes asked. Mexico, he said.

“I gotta give you this consent form,” she said, passing him a slip of paper. “It’s pertaining to ICE,” as in Immigration and Customs Enforcement.

Magallanes explained that ICE agents may come into the jail to interview the man, but he has the right not to speak with them. On the other side of the glass, the man nodded. He didn’t have any questions.

Magallanes is still getting used to explaining this — the jail only started using the consent forms Jan. 1, when a state law requiring them went into effect.

“Sometimes they ask me questions as far as: ‘Am I getting deported?’” Magallanes said. “I explain to them, ‘At this time, no. But I do have to advise you that it is a possibility.’”

It’s more of a possibility here than in many California jails. The Fresno County Sheriff’’s Department has a special partnership with ICE. Immigration agents have access to the jail’s database. So the information that Magallanes collected at booking? They can see that — plus any details about charges or criminal history in the database.

Based on what agents find there, they decide whom to question and whom they’ll eventually put in deportation proceedings. The Fresno County Sheriff’s Department isn’t privy to how these decisions are made, and ICE didn’t provide any details about how the program works for this story. Correctional officers at the Fresno jail say ICE agents come into the jail at least twice a week with lists of inmates to interview.

Last summer, Edgar Torres was one of those inmates. He was lying in his bunk when he heard his inmate number blaring from a loudspeaker. He had a visitor, but he wasn’t expecting anyone.

A guard escorted him from his cell to an interview room. It’s a tight space, with just enough room for two chairs and a small metal table attached to the wall. Inside the room, a man wearing a badge was waiting for him.

Torres was surprised. This was before the jail started handing out those consent forms, so he didn’t know ICE might approach him in the jail, and he didn’t know he had a right to refuse the interview.

Torres said the agent handed him a paper to sign and told him, “I want you to sign this so you leave the country. You don’t belong in this county. We know you came in illegally.”

ICE was right. Torres had been caught crossing the border almost a decade ago. He crossed again soon after and didn’t get caught. The agent was trying to get him to sign a voluntary departure order. Torres said he wanted to fight to stay with his family.

Torres has a misdemeanor conviction on his record, but it’s a serious one: domestic violence. He and his wife have had a rocky relationship. They got in some bad fights and she got a restraining order. A judge ordered him to attend classes, but when he and his wife got back together, he stopped going.

He said that he and his wife were working things out. They’d just had a baby last summer when Torres got pulled over for a broken taillight. He had a warrant because of the missed classes and ended up in jail.

Magallanes holds a consent form provided to inmates at the Fresno County Jail.

ACLU attorney Angelica Salceda said this is a common scenario.

“One of the biggest flaws of this program is that you can have someone who committed a mistake, and they paid the price for it and turned their lives around. Then they get arrested for something minor,” she said.

And if you’re undocumented, or even a legal permanent resident, the consequence isn’t just jail time. It can mean deportation.

Salceda said she worries that people who get arrested but are never charged or convicted can end up getting deported.

“Those are the types of practices that we think are incredibly problematic and that lead to separation of families and fear in our communities,” she said.

In a statement, ICE defended its practices in jails:

“When criminal custody transfers occur outside the secure confines of a jail or prison, regardless of the security precautions we take, there are greater safety risks for all concerned — our arrest target, ICE officers and the general public. It needlessly puts our personnel and innocent bystanders in harm’s way.”

Torres said that when he was in jail, ICE agents met with him three times. When Torres got out of jail, ICE representatives were waiting for him. He spent six months at a detention center. Eventually it was clear he wasn’t going to win his case. On the advice of his lawyer, Torres signed a voluntary removal order.

“In my perspective, it truly is a win-win,” Mims said. “It keeps people from being released back into our communities that have committed crimes — many times multiple crimes — and it keeps ICE in our jail, and they don’t have to go out into the community, which raises fear among people that ICE may not be looking for.”

After Mims launched her program in 2015, other California sheriffs followed her lead, including in Kern and Stanislaus counties.

“It creates a very complex framework around California because there’s a lack of uniformity,” said Asian Law Caucus attorney Saira Hussain. “People don’t always know, ‘If I end up in jail here, how will ICE try to access me?’”

At one extreme, there are counties like San Francisco with its strong sanctuary ordinance. ICE is allowed into the jails to conduct interviews only in rare instances there. Orange County sits at the other end of the spectrum. It’s the only county in California that empowers sheriff’’s deputies in jails to act as immigration agents under a federal partnership called the 287(g) program.

In between, there are counties like Fresno. Hussain said it may be a sign of what’s to come in the Trump age.

“When the message from the administration to local law enforcement is, ‘We want you to help us deport people,’ I’d say that Fresno is already sort of setting that path to really just unfettered cooperation.”

California already limits how police can work with immigration authorities. But the state Legislature is weighing a bill that would tighten things further. The California Values Act would bar Fresno — or any sheriff’s department — from dedicating resources to immigration enforcement. And it would stop them from letting ICE into jails to do interviews.