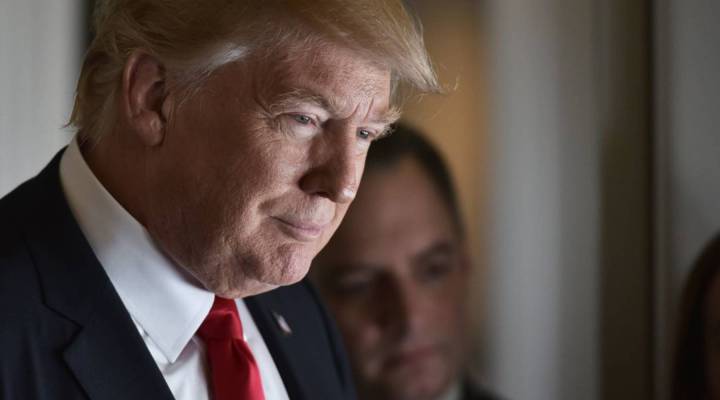 US President Donald Trump chats with reporters on board Air Force One before departing from Andrews Air Force Base in Maryland, bound for Palm Beach, Florida on February 3, 2017.    MANDEL NGAN/AFP/Getty Images)

US President Donald Trump chats with reporters on board Air Force One before departing from Andrews Air Force Base in Maryland, bound for Palm Beach, Florida on February 3, 2017.    MANDEL NGAN/AFP/Getty Images)

President Donald Trump’s plans for immigration policy enforcement call on the U.S. Department of Homeland Security to hire thousands of new employees, but union reps are saying that’s not going to happen without some changes.

Union presidents representing Immigration and Customs Enforcement agents and Customs and Border Protection agents voiced their concerns Wednesday, citing an arduous hiring process and low morale as obstacles to Trump’s hiring directives, even as they lauded the president’s dedication to immigration enforcement.

“We enthusiastically support the additional officers identified in President Trump’s executive order on interior enforcement. However, we have very little faith in the ability of ICE leadership to most effectively implement these additional officers and support staff,” said Chris Crane, who represents ICE agents, at the hearing held by the Senate Committee on Homeland Security and Governmental Affairs. “From our perspective, ICE should be making every effort to provide U.S. taxpayers the biggest bang for the buck.”

As many as 10,000 more ICE agents and 5,000 CBP agents could be hired under Trump’s plan. The union representatives said an overhaul of how the departments are run is needed before additional agents can be hired.

“The workplace in many areas within ICE is toxic,” Crane said. He later added: “We need our piece of the swamp drained.”

Crane was specifically concerned about whether the current ICE leadership would be able to “effectively implement” the new 10,000 agents if and when they are hired. According to him, “proposed staffing increases at ICE have simply become a numbers drill at ICE.”

The Department of Homeland Security would not comment on the individual allegations made during the hearing, but press secretary Gillian M. Christensen said in a statement to Marketplace, “One of the Department’s most significant priorities is to support these dedicated professionals in their efforts to secure our borders, protect the integrity of the immigration system and safeguard our communities from threats posed by bad actors who are in the country unlawfully.”

Here’s what the two unions have to say about the hiring challenges faced by both departments:

Trump’s commitment to immigration enforcement has lifted the morale among ICE and CBP agents who have felt underappreciated and “publicly demoralized” by the Obama administration, according to Crane.

“Many lawmakers, pundits for political parties and the previous administration have consistently made disparaging remarks about ICE employees, their mission and the laws they are sworn to uphold. In fact, these actions continue as ICE officers and their arrest activities are incorrectly portrayed and referenced publicly in the media by political pundits as “gestapo” tactics and other Nazi references and false and hateful accusations,” Crane said. “It’s pretty hard every day to maintain morale when your own government and the media turn on you for enforcing the laws enacted by Congress.”

The morale issue is not much better at CBP, according to Brandon Judd, president of the National Border Patrol Council.

Judd, who worked under the Clinton, Bush and Obama administrations, said that he has “never seen the morale lower than it has been over the past four years. Please understand, I do not mean that as a political statement, it is simply a fact. The men and women that I represent felt under-resourced and underappreciated.”

A U.S. Border Patrol keeps watch along the U.S.-Mexico border in Nogales, Arizona.

One of the ways to improve morale, according to the discussions at the hearing, would be to allow some border patrol agents to take their work vehicles home and be able to go straight into the field at the beginning of their shift. Currently, they are required to use their personal vehicles to drive to their work vehicles, and then drive into the field, and then return for their personal vehicles at the end of their shift.

Crane pointed out that at ICE, they have a slightly different issue with their cars — specifically the unmarked cars that were bought for undercover work.

“Managers have taken the majority of those vehicles, and they’re their personal take-home rides at taxpayer’s expense. They have no mission need to take them, they don’t respond to things while our officers then don’t have enough vehicles out in the field to perform their mission,” he said.

“We literally have people in — you know how big a 13-passenger detention van is? A great big marked [van]. They are out there trying to do undercover work in 13-passenger detention vans with ringers on them when they go in reverse. And so at five in the morning, when you went too far one way and you need to back up, every window is opening up, going ‘Hey, there is ICE!’ because our managers have taken all of our vehicles.”

Crane’s colleagues at CBP were also concerned about their hiring abilities.

“We need to make sure we are paying attention to the hiring process,” said Anthony Reardon, national president of the National Treasury Employees Union that represents CBP agents at hundreds of U.S. ports. He pointed out that for CBP, it can take anywhere from 105 to 150 applicants to generate one new employee. “That to me is just incredible.”

One of the reasons for this is the polygraph testing that the applicants undergo.

“My understanding is that the latest numbers have us failing approximately 70 percent of the applicants,” said Judd of the NBPC. “This failure rate is almost three times higher than other federal agencies, and unfortunately, CBP has been treating prospective job applicants as if they were criminal suspects. We have had police officers who have passed a polygraph for their agency fail our polygraph. We have had military veterans with impeccable service fail our polygraph. We have even had former border patrol agents who left for other law enforcement agencies fail our polygraph upon trying to return.”

Additionally, potential applicants often have to travel for one interview to one location and then to another location a few weeks later, accruing expenses for which they are not compensated, Reardon said. Altogether, it can take as many 16 to 18 months to bring someone on board, he said.

“How many people in this country can afford to sit around for 16 to 18 months before they can be brought on board?” he added.

“In the last two years, border patrol has lost 500 agents to ICE. When ICE starts hiring in earnest, the border patrol will lose several thousand border patrol agents overnight if we do not take corrective action,” Judd said. “As Congress considers making additional investments in border security, I strongly urge you to consider restoring pay parity with ICE.”