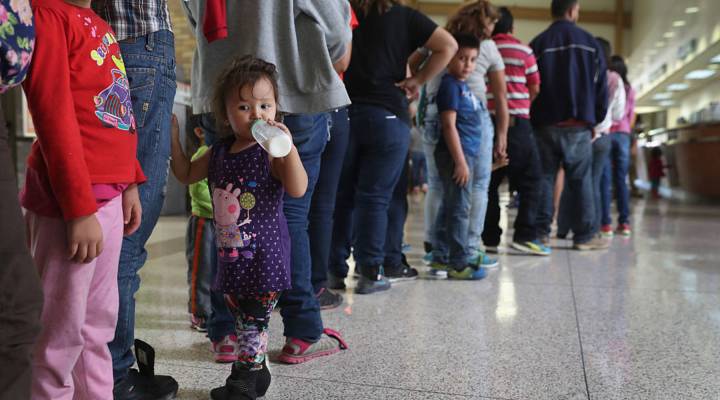 It takes a lot of money to run the U.S. Immigrations and Customs Enforcement, or ICE. In fiscal 2016 the department’s budget was $6.3 billion, 17 percent more than the year before. Part of the budget increase goes toward the 34,000 beds for detainees at ICE facilities across the country. One of them, the Etowah County Detention Center in Gadsden, Alabama, has become a long-term depository for immigrants awaiting deportation or hearings on their cases.

One of them is Luis Fernando Estela Gomez, from Colombia. He came to the U.S. on a tourist visa 22 years ago and stayed. In 2010 he was arrested for selling stolen wedding dresses and Viagra. Estrela has been at Etowah for three years, after spending a year at a New Jersey detention center.

“I don’t imagine it was going to take that long,” Estrela said. “And when I got here I found out people have been here like seven years, six years, all kind of times. Then I figured it out, it was going to be a long run.”

Immigrant detention is supposed to be brief — weeks or months at the most. But at Etowah, many inmates are held for years while they go through the legal system. The reason so many detainees are funneled into this Alabama detention center from other states has to do with ICE’s bottom line.

“Etowah offers ICE the lowest bargain basement per diem per detainee price in the entire country, so it’s cheaper to house people there,”  Jessica Vosburgh, an immigrant rights attorney in Birmingham, said.

It is much cheaper. On average, for every detainee, ICE pays detention centers $124 a day. At Etowah, ICE pays only $45.

“So it’s ICE’s preferred facility for the people that they are planning to hold in detention for a long time,” she said.

Some ICE contracts offer guaranteed minimums. In other words, ICE promises to pay for at least a certain number of detainee beds to be filled. These contracts are worth tens of millions of dollars. Some centers, many of them private prisons, are benefitting. But in cash-strapped Etowah County, Commissioner Tim Choate said the county barely breaks even.

“There’s no money, there’s no profit in this thing,” he said.

I asked him how it’s worth keeping the facility open then. “In my opinion, speaking for myself, it’s not,”  he said.

Then again, he said, it’s easier than shutting the center down: it does generate jobs.

Silky Shah, co-director of Detention Watch Network, said in some cases, especially poorer areas, a detention center might not be profitable. “But the reality is that because these contracts have existed for some time now, these counties have come to depend on it,” she said.

Because detainees are housed at Etowah for so long at such cheap rates, Shah said, it’s created what critics call some of the worst conditions for detainees in the country. One group made up of human rights advocates and religious groups in Alabama is calling for the government to shut down Etowah. The group holds rallies, circulates petitions and points out human rights abuses.

“A lot of concerns about food, outdoor recreation there, legal access, due process issues,” Shah said.

There’s no in-person visitation. The “outdoor” recreation area isn’t actually outdoors. It’s a small area with bars near the ceiling to let in some light and air. The detention center is one wing of the county jail, which sits across the street from the county commission offices in downtown Gadsden. There’s also a bail bondsman, a pawn shop, a law firm, and a barbecue place.

Natalie Barton, spokeswoman for the Etowah County Sheriff’s Office, said the detention center has passed every inspection it’s undergone, whether it’s through ICE or an NGO.

“We run a very safe and secure facility where individuals are well taken care of and given the necessary needs to sustain life,” Barton said.

ICE wouldn’t agree to an interview. In the meantime, detainees like Estrela will keep waiting. It doesn’t look good. He’s out of money for lawyers, After four years in detention for a non-violent crime, Estrela thinks he’s paid his dues. Other detainees gladly take deportation in hopes that one day they’ll return to this country again.