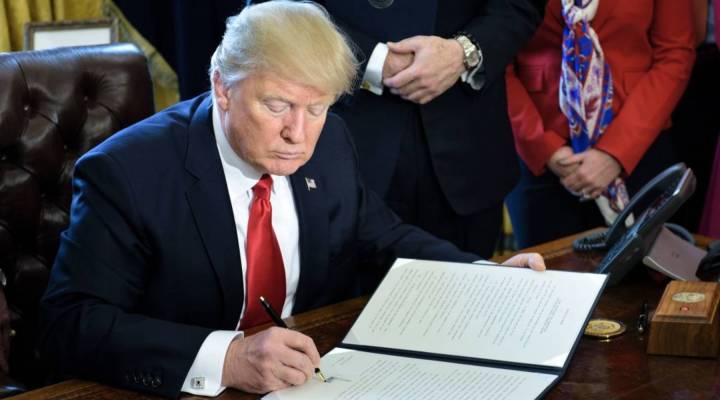 The Consumer Financial Protection Bureau was created under the Dodd-Frank financial reform law during the Obama administration. Now that Republicans control the White House and Congress, they’re proposing some big changes for the CFPB. Some members of Congress even want to abolish it.

The CFPB just marked its fifth anniversary. It says over the past five years, it’s helped 27 million consumers get more than $11 billion in relief from financial institutions. It’s also helped consumers like Tracy Kilgore, who accused Wells Fargo of deception.

“I was really angry,” she said of her experience with Wells Fargo. “I felt like I was a victim of a crime.”

Kilgore said back in 2011, she was elected treasurer of her local chapter of Daughters of the American Revolution in Albuquerque, New Mexico. The chapter had its bank account at Wells Fargo. Kilgore wasn’t a customer there. She had to go in and sign signature cards so she could access the chapter’s account. Kilgore said the Wells Fargo employee helping her took a long time. It didn’t feel quite right.

“And she spent an awfully long time typing away on that keyboard,” Kilgore said. “And I remember thinking at the time, ‘Why is it taking so long?’”

Almost three weeks later, Kilgore got a letter from Wells Fargo saying her credit card application had been rejected. But Kilgore hadn’t applied for a credit card. She thinks the Wells Fargo employee who helped with the signature cards did it without her permission. Wells Fargo said it can’t comment on a specific case, but is committed to restoring customer trust.

Still, Kilgore has joined a class-action lawsuit against Wells Fargo. She said the CFPB has been a good resource for her case, and she doesn’t want it to be abolished by Congress.

“I think they’re just doing it so crooks can be more crookeder, and consumers need protection,” she said.

But not all of the legislative proposals on CFPB would kill it.

“Innately, there’s nothing wrong with the CFPB,” said Ed Groshans, an analyst at Height Analytics. He said the problem with the CFPB is the way it’s structured.

“It’s completely independent and outside the control of Congress,” he said. “And I think for some Republicans, just that structure in and of itself they don’t care for.”

Some Republicans want to change that structure, starting with the CFPB’s budget. Right now it’s funded directly by the Federal Reserve, not through an appropriation from Congress.

“I don’t think you ever want to give any agency of any kind a complete blank check,” said Francis Creighton of the Financial Services Roundtable, a trade association for banks. He’s been lobbying for congressional control over the CFPB’s budget.

Creighton also wants Congress to change the leadership of the CFPB. Right now it’s headed by a single director. Creighton supports legislation that would replace the director with a bipartisan five-member commission. Creighton said that would give banks some stability. Otherwise, he said, CFPB rules could change dramatically every time a new president appoints a new CFPB director. But strong backers of the CFPB, like Democratic Sen. Elizabeth Warren, say the CFPB would get bogged down in political bickering if it were headed by a commission instead of a strong director.

The Republicans who want to make these changes to the CFPB will probably need some support from Democrats. But Warren said she’ll resist any changes that would erode the CFPB’s independence.

“I will fight them every inch of the way,” she said. “Count on it.”

As the debate swirls around it, the CFPB is continuing work it started under the Obama administration, including new rules for payday lenders.