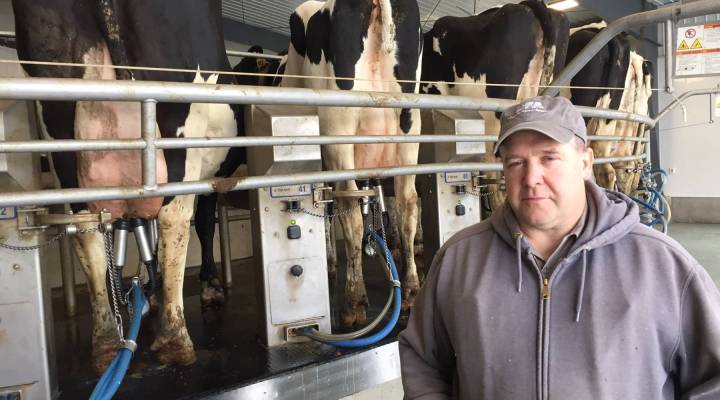 COPY
Dave Styer, at Alfalawn Farm, his dairy in Menomonie, Wisconsin, sees in Trump "somebody that was cheerleading for business to succeed and business to do well." Annie Baxter/Marketplace
The Big Promise

Dave Styer, at Alfalawn Farm, his dairy in Menomonie, Wisconsin, sees in Trump "somebody that was cheerleading for business to succeed and business to do well." Annie Baxter/Marketplace
Listen Now

For decades, Dave Styer and his family only milked a few hundred cows at Alfalawn Farm, their dairy near Menomonie, Wisconsin. Then, a couple years ago, they ramped up to nearly 2,000 cows.

Styer said it was a gamble, but he felt Wisconsin’s pro-business, Republican Gov. Scott Walker had their backs.

“Because if we started this and then all of a sudden faced a lot of opposition from the government regulatory side and things like that, it wouldn’t have been as strong a business climate,” he said. “So that weighed into our decision to expand when we did it — that and a lot of prayers.”

In November, Styer voted for Donald Trump. In him, Styer saw another advocate for lower taxes and fewer regulations.

“[He’s] somebody that was cheerleading for business to succeed and business to do well,” Styer said.

Trump carried Wisconsin, a traditional Democratic stronghold. Dunn County, where Styer lives, is one of the counties where voters helped elect President Barack Obama in 2008 and 2012. In 2016, the county went for Trump.

But many Dunn County residents’ hopes and fears about the economy are complicated and can’t be reduced to who they voted for or against in the election.

For example, some of President Trump’s policies, including his crackdown on illegal immigration, are causing Styer angst. He has become reliant on immigrant workers from Mexico. Styer said local workers snub farm work; it’s physically demanding, and cows need milking round the clock. Styer said he examines their work documents but lacks the expertise to spot a fake.

Styer said for now Trump seems to be focused on deporting immigrants with a criminal record. But he said if the net widens, that would be a big problem.

Another Menomonie denizen, Luis Noyola, an immigrant from El Salvador, has a green card application in process, so he and his wife, Brianna, said they are less worried than some families headed by an undocumented parent.

Luis and Brianna Noyola work three jobs between them and “we’re still trying to make it,” Brianna says. Above, they laugh with Kajya, 9, one of their three children, at home in Menomonie, Wisconsin.

They have three kids at home, ages 4 to 13, including two kids from Brianna’s previous marriage. The couple is also working to bring Luis’s son from a previous relationship over from El Salvador.

Brianna, a tall blond who looks every bit of her Norwegian ancestry, said the couple is struggling financially.

“He works two jobs. I have a job. I get child support from my previous husband, and we’re still trying to make it,” she said.

Luis said until he gets the green card, his work options are limited to grinding, low-paying jobs. His weekdays start at 5:30 a.m. at a foundry. Weekends, he works at a dairy, starting at 3 a.m.

And without the in-state tuition afforded by residency, Luis said he cannot easily pursue additional educational opportunities, which he said would improve his earning potential. In El Salvador, he studied industrial engineering.

Even if Luis avoids deportation, the kids in their household worry about how they will be treated under the immigration crackdown. That’s especially true for 13-year-old Anika Jimenez, who strongly resembles her Mexican dad, Brianna’s first husband.

The teenager looked gloomy when the topic of Trump came up.

“He doesn’t like me,” she said. When her 4-year-old brother asked who Trump doesn’t like, Jimenez tersely replied, “You.”

Brianna didn’t vote for Trump or Democrat Hillary Clinton, for that matter. She went for an independent candidate. Still, the Noyolas said they aren’t rooting against Trump altogether. They hold out hope he will improve the economy. Maybe the foundry Luis works at will do better and lose less work to China, and he’ll get a pay bump.

“I really try to think positively about Trump,” Brianna said. “You don’t want the pilot of the plane you’re in to do bad.”