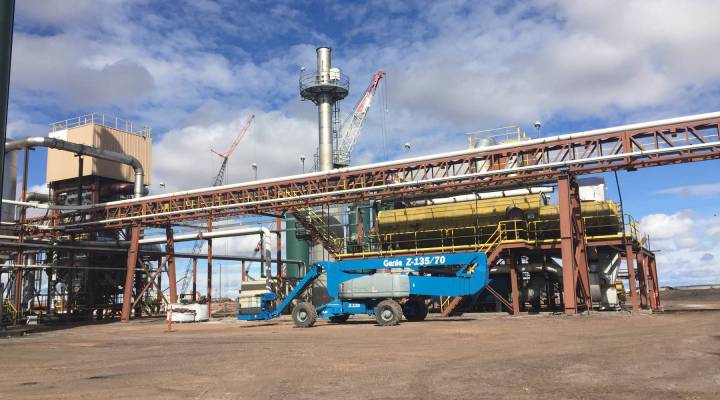 Marketplace Weekend host Lizzie O’Leary is traveling to three different cities, roughly the same size, that all have very different economies. It’s an ongoing, country-spanning series, and her latest dispatch comes from Gillette, Wyoming, where one of the dominant industries is coal.

Marketplace host Kai Ryssdal spoke with O’Leary about why coal is so important in Gillette, what the mayor there hopes coal can do for her city in the future and how companies are reimagining how they use coal. Below is an edited transcript of their conversation.

Kai Ryssdal: Tell me a little bit about Gillette, first of all, and why you’re there.

Lizzie O’Leary: We’re here as sort of the second stop in this series that we’re doing where we travel across the country. We’ve been talking to mayors around the country for the past two years about their jobs in three similarly sized cities: Dalton, Georgia; Gillette, Wyoming; and Corvallis, Oregon. But they all have really different economies and different populations. So, Gillette is an oil, gas and really coal town. So much so that when you fly in here, you see an open-pit coal mine from one side of the plane and grassland on the other. I mean, this is really coal country, and Wyoming produces about 39 percent of the nation’s coal. Those numbers are from 2014, but this is really part and parcel in everything here.

Ryssdal: All right, so talk to me for a second then about how they’re feeling about the current political conversation. Because as you know and as we’ve said on the radio, I don’t know how many times, the president has promised to bring back all those extractive jobs. How do the good people of Gillette, Wyoming, feel about that?

O’Leary: They’re very hopeful about that. I think there is optimism that he will do that. We’ve heard that from a couple of different people. We came here to visit the mayor, and here’s what she had to say. This is Louise Carter-King, the mayor of Gillette:

Louise Carter-King: I think our optimism will just keep going. That the country will still need coal for the next 30, 40 years. There are so many uses for coal that we haven’t even thought of yet. And that’s why, I just think we should not turn our backs on 600 years of coal.

O’Leary: Six hundred years, that’s sort of the reserves people are saying are around here. I should point out that this has been a tough time, certainly, leading up to the election. There are about 500 layoffs last year, some of those have come back. And we did talk Kai about something that you’ve covered a lot, which is this question of, the decline of coal, well, regulations are a part of it. But a lot of this is just changing the way we use fossil fuels. And, you know, coal mining has become more automated. And at the same time, natural gas is very cheap.

Ryssdal: Yeah, it’s that whole market forces thing. So Scott Tong had a piece yesterday from Illinois about how eastern coal is maybe seeing now that coal wasn’t so great in the long term. Are the folks in Gillette looking at that sort of thing and are they taking steps to prepare for life after coal?

O’Leary: Yes and no. I guess I would say they are taking steps to prepare for life with a different kind of coal or coal being used in a different way. The economy here, I cannot tell you how tied it is to extractive industries. I went to this amazing recreation center where there’s a huge climbing wall, multiple gyms, pools. All of that stuff, it’s all paid for by taxes. And the money for those taxes comes from the energy sector. At the same time, we went to a place yesterday called Atlas Carbon, which is an activated carbon plant. They are making filtration systems for power plants and for water. And, it’s kinda gimmicky, but they brought out a bunch of different products including Biore nose pore strips that are made with activated carbon, to say, “Hey, there is other stuff we can do with this resource.” But yeah, this is sort of a constant battle here. Do they want a different kind of economy or one that uses the resources they already have a little bit differently?