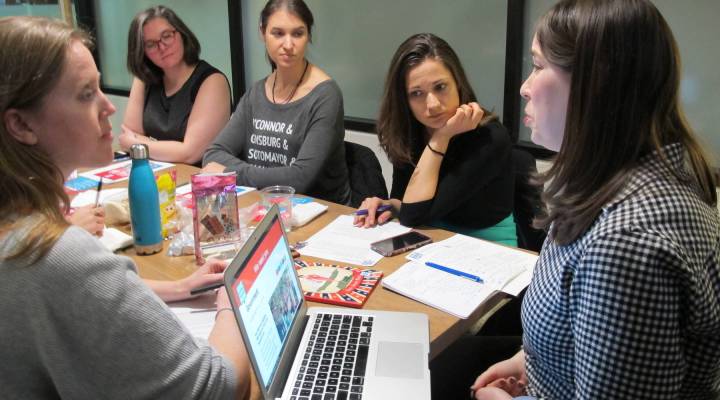 COPY
Staff members meet at She Should Run, a nonprofit that encourages women to run for office. Kimberly Adams/Marketplace

Staff members meet at She Should Run, a nonprofit that encourages women to run for office. Kimberly Adams/Marketplace
Listen Now

Malka Zeefe is 38, and until recently, she’d never considered running for political office.

But since the election, Zeefe, who’s a corporate lawyer and lives in Alexandria, Virginia, has already sought out and been appointed to a city commission for children, youth and families. She’s a registered Democrat, and now she’s thinking about running for school board.

“For me, the time of just sitting back is over,” she said.

Republicans are inspired too.

“I got to see two awesome women win. Those are the people that really inspire me to want to kind of throw my hat in the ring,” said Aly Higgins, a 26-year-old political fundraiser for two Republican congresswomen in Washington, D.C. She’s considering moving to New Hampshire, where she grew up, and running as a Republican for Congress.

Higgins has some hesitations. A big one: as a politician, you’re constantly under public scrutiny, and you have to have thick skin. She said that might be hard for her. She’s used to working behind the scenes as a fundraiser.

“Hearing people say horrible things about me,” she said, “I’d be lying if I said that wouldn’t bother me, you know?”

There are other things to worry about too. Becoming a politician is basically starting a new career, and it can mean taking a pay cut. Also, some people are afraid of fundraising or public speaking, and they’re not sure where to start.

That’s where groups like She Should Run come in. It’s a nonprofit that encourages women to run for office. It offers online training courses on how to parlay leadership experiences into public service and how to prepare for a campaign.

Erin Loos Cutraro, CEO of the nonprofit, said more than 9,000 women — Republican, Democrat, Independent — have signed up since the election.

“What we’re seeing overall in the country is a desire to be more connected, more hands on in our communities,” she added. Previously, the group was seeing interest from about 150 women a month.

Another group called Run for Something recruits progressive millennials to run for down-ballot races. It connects them with organizations that offer training in skills like political fundraising. More than 6,000 people have signed up in the month since the group launched, and Amanda Litman, the group’s co-founder, said they’re sorely needed. In 2016, nearly 42 percent of state legislative races had only one major-party candidate.

“We then ask ourselves why don’t people show up to vote,” Litman said.

By recruiting aspiring politicians, Litman and others are trying to make sure there’s a reason for voters to show up at the polls.