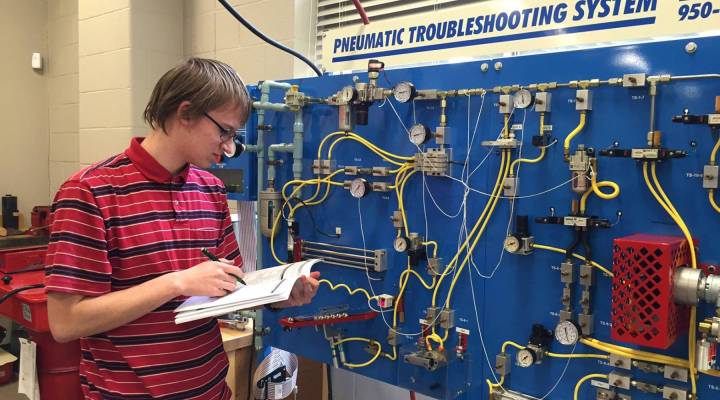 In a lab at Reading Area Community College, 18-year-old Benjamin Eckenrode stands in front of a blue wall rigged with pistons, pumps and gauges. It’s a pneumatic troubleshooting system, designed to teach students how to identify and solve problems with manufacturing equipment.

“This piston is supposed to go down and actually pick up a ball, but it is not,” he said.

Eckenrode’s assignment is to figure out why the piston isn’t moving. The high school senior is taking this college class as part of a program to prepare more young people for careers in the technical trades.

It’s still possible to get an entry-level factory job with just a diploma paying maybe $17 an hour, said Bonnie Spayd, executive director of the Schmidt Technology and Training Center at the college. But with a little extra training, her students can make $20 to $30 an hour, plus benefits.

“The good news for you, if you’re not employed and you want to get employed, pretty much the world’s your oyster,” she said. “You’re probably looking at four or five different job offers.”

That’s probably not the story you’ve heard about Reading, Pennsylvania, which is in many ways a typical Rust Belt town. In the 2010 census, Reading was found to have the highest poverty rate in the country among cities of at least 65,000. Since 2001, the area has lost nearly 8,000 manufacturing jobs — about 20 percent of its manufacturing base.

“There’s a lot of bad press out there, a lot of large companies that have closed,” said Ken Krauss, CEO of U.S. Axle. The nearly 100-year-old company makes components for locomotives and large construction equipment.

The manufacturing sector has stabilized in recent years, with some 500 companies in the area making anything from batteries to chocolate to surgical needles. But the stigma against manufacturing has stuck, Krauss said, and the workforce hasn’t kept up to fill the increasingly technical jobs. With a quarter of the local manufacturing workforce set to retire in the next 10 years, employers and educators are racing to train a new generation of workers to fill those jobs.

“We’re probably 10 years behind where we need to be in terms of training and making sure that we have a mature pipeline, and that’s where these sorts of programs come into play,” Krauss said.

The Schmidt Center was founded about 10 years ago to build that pipeline, in partnership with employers and local high schools. Manufacturers are also competing with colleges for talent, said Teri Baller, the work-based learning coordinator at Reading Muhlenberg Career and Technology Center. Students have heard their whole lives that they need four-year degrees, she said.

“When you walk into the classroom and you ask how many kids are going to college, they all raise their hand,” she said. “So they haven’t even really thought about any other options.”

In Reading, one of those options is East Penn Manufacturing Co., a huge complex in the hills outside the city that employs more than 7,000 people. The company makes lead-acid batteries for cars, motorcycles and data centers.

Joe Hritzko, 39, started on the production line 10 years ago, with just a high school diploma. Then the company sent him to the Schmidt Center for additional technical training. Now he’s a maintenance mechanic making more than $26 an hour.

“I really, honestly couldn’t be happier,” he said. “I’m home every night. I make a good wage. I’m able to afford a very comfortable lifestyle.”

He’s also able to do something his parents were not, he said, “and that’s at least give my kids something, if something would ever happen to me, or provide them with a good future.”

Hritzko’s dad worked for a steel plant that moved to Mexico after the North American Free Trade Agreement. President Donald Trump’s campaign message of bringing back those jobs resonated in Reading. The typically blue county voted red in the 2016 election. Employers say their challenge is training enough workers for the jobs that are already here.