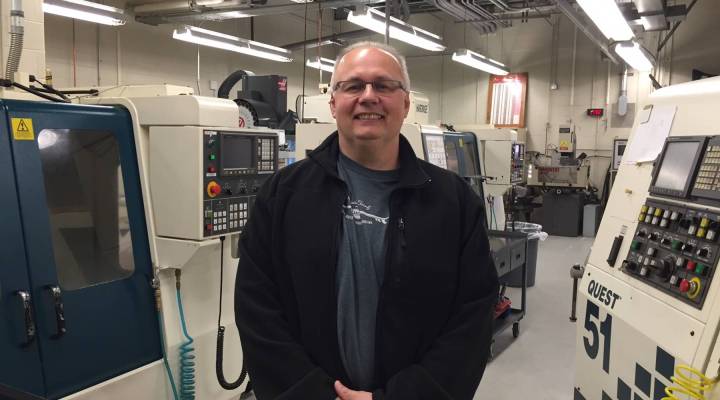 When Joe Snyder was 23 years old with just a high school diploma, he got a job at auto parts supplier Dana Corp. in Reading, Pennsylvania, as a press operator.

“I worked there for 17 years, and they closed the plant and moved some things to Mexico, Venezuela,” he said.

The North American Free Trade Agreement, signed in 1993, came with funding for workers displaced by globalization. So Snyder enrolled in an associate’s degree program in electronic engineering “just to get a job at Lucent Technologies, because they needed people there, and you needed to have an electronic engineer associate’s degree,” he said. The program cost about $22,000.

Then, about halfway through, Lucent started laying people off.

“By the time I graduated, they were in Singapore,” he said, “so I had to scratch that.”

According to the National Skills Coalition, about half of jobs today require more than a high school diploma, but less than a four-year college degree. After a long downturn, manufacturing has stabilized in Reading, but many of the jobs require increasingly technical skills. For older workers, that often means retraining, sometimes several times.

After he graduated, Snyder couldn’t find an engineering job, so he went into construction for a while. Then he worked in drug and alcohol rehabilitation. When the management changed and he lost that job, he went back into manufacturing, making surgical tools.

“About two years into it, we were notified that they were going to move their operations to Mexico,” he said.

Sensing a pattern here? Again, Snyder qualified for federal funding for retraining. He received about $15,000, he said, to study precision machining at Berks Career and Technology Center.

Computer numerical control, or CNC, technology appealed to him, he said, because “a lot of baby boomers were retiring, and they didn’t have a lot of people to replace them.”

At 56, Snyder himself is boomer, but not ready to retire. Most of his fellow students were teenagers in high school. The thing is, Snyder wanted to do vocational training when he was in high school, but a guidance counselor said his grades were too high.

“They thought that I would do better by getting a college degree rather than taking a trade,” he said. “But the way I felt, I wanted a trade, and I just really couldn’t get it.”

Now he has a trade. Snyder graduated last month and walked right into a job as a machinist.

He’s earning about $19 an hour — not nearly what he made all those years ago in his union job at Dana, but enough to live well and spoil his grandkids.

“I’m hoping this is the last time I have to do this,” he said, “because, you know, starting over three times, it doesn’t feel good.”