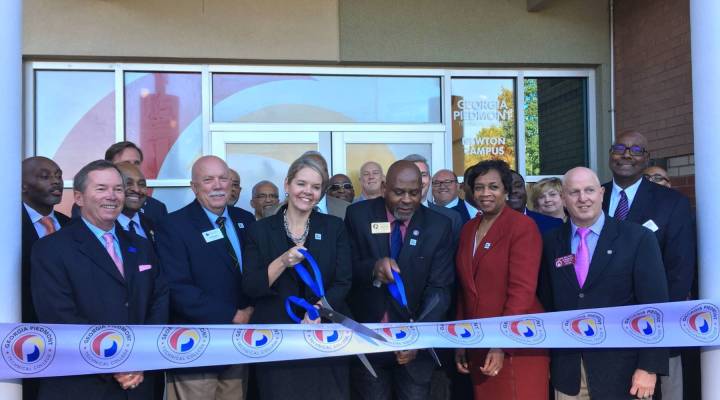 Factory workers are aging and manufacturers are worried there won’t be enough young people with the technical skills to do their jobs. So 10 states have embraced Germany’s apprenticeship model to help fill these manufacturing positions.

In Georgia, high school students are training for factory jobs in a German-style apprenticeship program. Seventeen-year-old Northgate High School student, Cole McKeehan, has a busy schedule but still manages to wake up at 3 a.m. on Fridays so he can get to his job at E.G.O. North America.

“I love coming to work. This is something you know, unique, it’s something I’ve never seen before,” McKeehan said. “My parents love it. They wish they had something like this they could have done.” When he arrives at work, he clocks in, heads to his toolbox at his work station and gets hands-on training from an older employee who serves as his mentor.

E.G.O. is a radiant heating elements and electronics factory, which mostly makes the parts inside electric stoves, in Newnan, about an hour’s drive south of Atlanta.

The state of Georgia wants more teens like McKeehan to get exposure to manufacturing while they’re in high school by expanding the Georgia Consortium for Advanced Technical Training (CATT). Students start the three-year program when they’re 15 and are matched with a nearby technical college and a factory where they learn technical skills firsthand.

McKeehan splits his time between his studies at his high school, classes at the technical college and work experience shaping metal at E.G.O., where he makes $10 an hour. He said he still hangs out with his high school friends, but has an awareness of real-world responsibilities.

“I’ve been raised to know that I will one day have to work to live and I’m going to have to grow up quicker,” he said. “I see it as two steps early and getting out there, getting it done.”

This year, he expects to graduate with a high school diploma, an associate’s degree in precision manufacturing and a full-time job offer. McKeehan is currently one of 27 students in the apprenticeship program. It began with just 10 students in the fall of 2016 in Coweta County, Georgia.

“This is a great win-win for not only the student but obviously for industry,” said Georgia Lt. Gov. Casey Cagle. The state launched the program in 2016 after a German company, Grenzebach, which makes manufacturing equipment for other factories, had trouble finding workers, Cagle said.

The worker shortage is a national problem. A report from The Manufacturing Institute and Deloitte found U.S. manufacturers need to fill more than 3.5 million jobs over the next decade. Starting with Tennessee in 2011, the German American Chamber of Commerce helped set up German-style apprenticeship programs in ten states: Georgia, Illinois, Wisconsin, Michigan, Indiana, Virginia, North Carolina, South Carolina, Alabama and Tennessee. There are plans underway to help expand the program to six more states.

“When we have jobs for manufacturing or reliability technicians, we have a hard time filling them,” said Tony Wilding, a manager of the Michelin Tread Technologies plant in Covington, Georgia. “We have to go outside of the area.” Wilding’s company recently recruited a 15-year-old high school sophomore.

Companies train and mentor high school students, but also commit to $25,000 to fund student salaries. In Georgia there are 20 manufacturers that are part of the program.

Kenny Adkins with the Technical College System of Georgia said hundreds of students apply and the state wants to accept more of them.

“There is a significant need of manufacturing occupations throughout Georgia,” Adkins said.

But the state will need more manufacturers and technical college partners to train apprentices. Recently, the state relaunched Georgia Piedmont Technical College’s manufacturing program in Covington with a new Advanced Manufacturing Center. It includes five labs and more than $1 million of new equipment. It provides training in machine tools, electronics, mechanical training, automation and process control, as well as industrial wiring and motor controls. Adkins said it is part of the state’s effort to update the labs at the technical colleges.

“There was a great need for not only this occupational training, but we also know that if these students graduate high school and go off to find themselves, then it takes them about 10 years to come back to the technical college system and look at the skilled trades as a viable career option,” Adkins said. Training at the technical colleges is a key part of the program since child labor laws in the U.S. prevent the apprentices from working at the manufacturing plants until they turn 16, Adkins explained.

“I have set a bold goal so that by 2020 every student in Georgia will have access to a College and Career Academy,” Cagle said. “Within the next few years, all of our high school students will have the opportunity to become a GA CATT apprentice.”