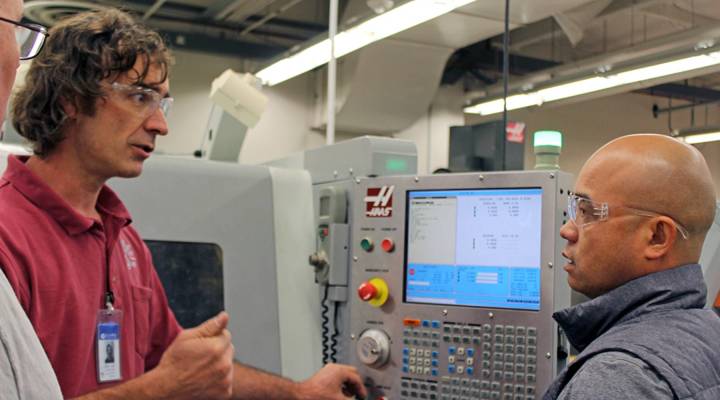 COPY
Gateway Community College instructor Jason Jenkins demonstrates how to type commands into a CNC machine in his industrial technology class. Three community college systems in Arizona will now teach the same curriculum for classes like this. Carrie Jung

Gateway Community College instructor Jason Jenkins demonstrates how to type commands into a CNC machine in his industrial technology class. Three community college systems in Arizona will now teach the same curriculum for classes like this. Carrie Jung
Listen Now

Officials in Arizona have big dreams about turning the region into a manufacturing hub. Their sales pitch to do that? Lots of cheap land, nearby international ports and a budding partnership with supply chains in Sonora, Mexico. But in today’s economic and political climate, turning this dream into a reality is taking some creative solutions.

In the manufacturing world, the buzzword for the relationship that Arizona and Sonora are creating is known as a “mega-region.” And one of the first companies to take advantage of it here was electric carmaker Lucid Motors.

Sonora’s governor, Claudia Pavlovich, was on hand when the electric car company announced a new plant in southern Arizona back in November.

“Look! I want to drive one!” she said as Lucid’s public relations team drove two of its luxury sedans between her and reporters at the event.

“Our two states together as a mega-region are a more attractive place for creating new business,” she said.

In this deal, Sonora plants will be supplying parts to the new assembly line coming to Arizona. The company estimates it will need about 2,000 workers here. The only problem? It’s coming to an area of the state where few people are trained for work in automotive manufacturing, which is why part of sealing this deal involves another partnership, with community colleges.

“We’re going to establish foundational curriculum,” said Kristin Gubser, a spokeswoman with the Maricopa County Community College District. The school system has teamed up with two other community college systems to develop a regionwide manufacturing curriculum that the schools are hoping can respond quickly to industry.

“It’s a matter of looking at what folks are already offering, finding commonalities and then filling in the gaps where the coursework, the curriculum, the training does not exist,” she said.

The state is under a lot of pressure to keep up its skilled labor force right now. Officials have seen a steady 6 percent growth in manufacturing employment here since 2010. Trevor Stokes with Arizona’s Office of Economic Opportunity said when pitching the area to new businesses, the first question he always gets is whether company leaders will be able to find the talent that they need.

“They say ‘I need production associates, and I need engineering techs, and those middle-skilled occupations that I need so many more of,’” said Stokes.

Then there’s NAFTA, the North American Free Trade Agreement. The Trump administration has been talking about renegotiating it. Still, state officials say the current plan is to stay the course.