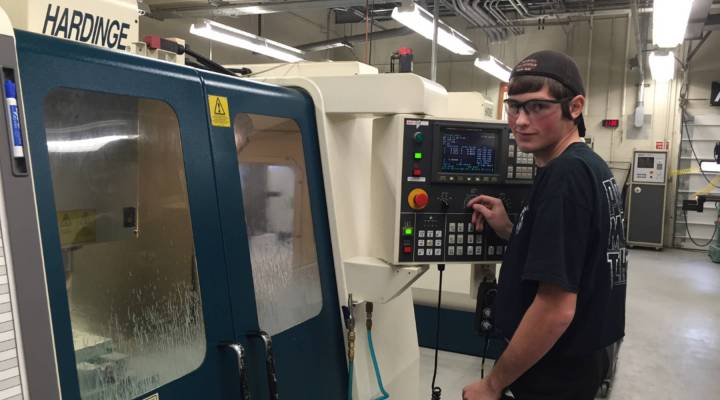 In the computerized machining lab at Berks Career and Technology Center, just outside Reading, Pa., Tim DeAcosta shows off a state-of-the-art computer numerical control, or CNC, machine. He sets a blank metal plate inside, types some codes into a control panel, and closes the double doors to watch as a tool carves a pattern into the plate.

This is modern day vo-tech. What’s known today as career and technical education has been trying to shake an old reputation as a dead-end track for kids who struggled in school. With about half of today’s jobs requiring “middle skills” — more than a high school diploma, but less than a college degree — vocational training is in high demand.

DeAcosta, 17, spends his mornings here, learning advanced manufacturing skills. In the afternoons, he rides the bus to high school for academic classes like English and math. He learned about machining — basically, the process of cutting raw material into a finished part — from a friend of his dad’s.

“He’s kind of like a grandfather to me,” he said. “I got to see what he gets to do and stuff, and I just really liked it.”

Machining is also one of the top “opportunity occupations” in the Reading area, according to the local workforce development board. Those are jobs with above-average pay for workers without bachelor’s degrees. A skilled machinist in the area can make well over $20 an hour.

“There’s a lot of guys like my dad’s buddy that are in their 60s and 70s that are getting out of it, and there’s not enough of us younger-generation kids to go into it,” DeAcosta said.

When he graduates next year, he’ll have several industry certifications. Those skills are in such demand, employers are out-bidding each other for workers, said Dave Schreibeck, who owns a small machine shop called DWS Technologies.

“We’ve gone to the mindset, we need to try and get these kids out of school,” he said. “Bring them in while they’re young, train them and try and nurture them into the positions that we need.”

Despite the demand, just 38 students are enrolled in the machining program. The school would like to have twice that many. The nearby Reading Muhlenberg Career and Technology Center is under-enrolled, too, said work-based learning coordinator Teri Baller. It’s not just the students who need convincing.

“A lot of the parents are stuck in that mindset where, ‘If my child doesn’t go to a four-year college then I must be a failure,’” Baller said. “So we’re trying to also educate parents and show them that there’s good money to be made and there are good jobs out there, and you don’t have to deal with all that debt that you get from college.”