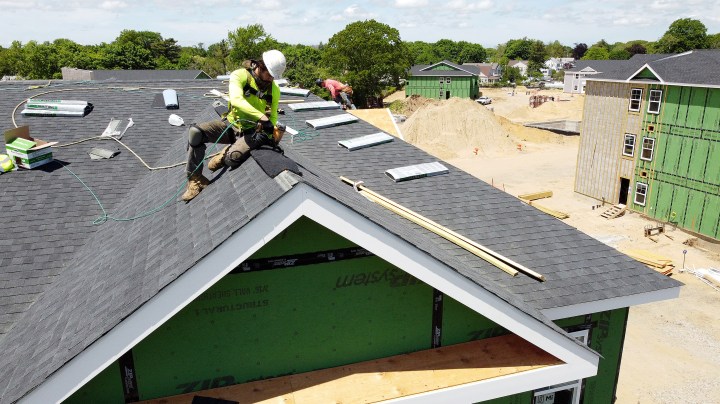 In a workshop at Carver Vocational-Technical High School in Baltimore, Maryland, a small group of teenage boys huddled around a newly framed wall. Wearing hardhats, safety glasses and, of course, masks, they took turns measuring and cutting drywall to attach to the frame.

The class is part of a summer training program. Students learn basic carpentry skills like safety, construction math and how to use tools. It’s a partnership between the Home Builders Institute, Baltimore City Public Schools and the Maryland Department of Juvenile Services.

“I built my sister a little dollhouse,” he said. “Before my father passed, he been building stuff. So I’ve been looking up to him and now, look at me, I’m here.”

Lewis will finish with an industry-recognized certificate that could lead to an entry-level job.

“We hope to get students out of high school making $12 to $15 an hour,” said Ed Brady, CEO of the Home Builders Institute, a nonprofit training group. “And the industry itself pays very well. I mean, there’s a shortage.”

Yes, he said shortage, even when more than 20 million people are out of work. Demand for new houses has continued to grow during the coronavirus pandemic, thanks to record-low interest rates and a shortage of existing homes for sale. Construction is generally considered essential, so building has carried on. According to the National Association of Home Builders, the industry has already recovered most of the jobs lost during the early months of the virus.

As more skilled workers retire from the industry, Brady said, not enough young people are coming in. Even at a trade school like Carver, students are drawn to fields like nursing or engineering, said career and technology teacher Lynn Rhue.

“A lot of times, initially, students don’t necessarily see the value in the construction trades, because they glamorize some of the other ones in our society,” she said.

To recruit more students, the Home Builders Institute has launched programs in more than 100 high schools around the country. It’s also targeting underrepresented groups like women, veterans and people involved in the justice system.

Lewis was just 11 years old when his father died. Since then he’s been in and out of detention.

“I just had to turn my life around,” he said. As a father of two young children, “I got more to look forward to now,” he said. “I’m trying to be better.”

Lewis grabbed a screw gun and got back to work hanging drywall. He plans to finish high school in the spring and wants to go on to college.

“I want to play basketball, for real,” Lewis said. “But since I’m going to have a trade in this, why not go take this to the full advantage?”

And if construction hiring continues to pick up, he should have no trouble using his new skills to land a job.