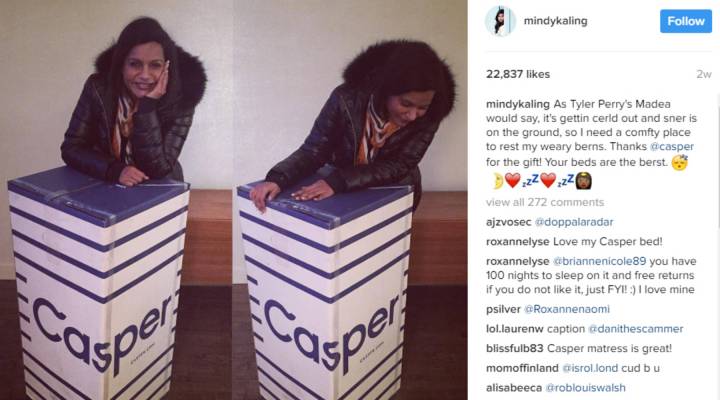 Is that an #Ad? Or does she just really love her mattress?

Is that an #Ad? Or does she just really love her mattress?

Advertisers send money to platforms like Facebook and Instagram because that’s where the eyeballs are. But sometimes it’s tough to tell if a post is an ad or not. That’s where Katie Notopoulos comes in. She’s a senior editor at Buzzfeed News and her column “Is This an Ad?” tries to figure out what’s what.

Marketplace host Kai Ryssdal talked with Notopolous about her latest installment, “Was Mindy Kaling Paid to Post on Instagram About Mattresses?”

Katie Notopoulos: So Mindy Kaling posted a picture of herself with a box of a cardboard box that contains a foldable Casper mattress. And she said “thanks to my friends @Casper” and also some extended joke about how she was excited for the new bed. Someone had pointed this out to me saying “Is this an ad or not? I can’t tell what’s going on here.”

Ryssdal: And you figured this is great fodder for the column “Is This an Ad?” Right?

Ryssdal: So how did you figure it out? What did you do?

Notopoulos: Well, first I reached out to a representative for Mindy Kaling, and they told me that she was in production and she wasn’t able to answer questions right now or do interviews. Fair enough. So then I reached out to Casper, and I asked them, “Hey what’s going on? Was this a freebie? Was she paid? And they responded that she was not paid to post about it, but she received two free mattresses right after I had reached out. They realized that it was a little confusing the way that she had written her Instagram post. And so they asked her to change it. So now the Instagram post says thanks to Casper for the gift.

Ryssdal: OK, so Mindy Kaling can obviously afford her own mattresses even to have them, right? So what is the, why does this matter? What’s the essence of this column and your reporting on this?

Notopoulos: Well, so the FTC has these guidelines for how social media and blog posts about freebies and ads and things like that are supposed to go. And it’s a little confusing because you know it’s not as straightforward. When you see an ad on television, you immediately know “Hey, it’s the commercial break in my television show. This is an ad.” When you’re streaming through Instagram, and you see a celebrity who mostly posts pictures of themselves, or you know, whatever they’re doing that day, and then all of a sudden there’s a picture, and they have a product, and you’re not really sure if they just like that product. It’s confusing!

Ryssdal: And you say this in the post about the Mindy Kaling ad. I mean, she posts on social about regular stuff. Right. And so it’s even a little more confusing.

Notopoulos: Right. I mean, this is one of the things where the gray area is weird because it varies so much celebrity to celebrity. You know Beyonce doesn’t post about her favorite ice cream flavors. That’s just not a thing Beyonce does. But Mindy Kaling does. She’s someone who, like, loves to talk about, “Hey, I tried this thing and I love it.” And that’s something that normal people actually do. And that’s not too weird, you know. I might say, “Hey, I love, you know, Schweppes ginger ale. It’s my favorite soda.” I’m not getting paid by Schweppes for that. I just love ginger ale.

Ryssdal: Is the disclosure when it happens usually as clear as thanks Casper for the gift? How do celebrities let us know that this is a freebie or a gift or they’re being paid or whatever?

Notopoulos: It’s a little tricky. The FTC doesn’t have any exact verbiage that it wants you to say. And so ideally it would be as crystal clear as possible. You would say, “#Sponsored” “#Ad,” which you do see in some places, and that’s the sort of most-clear version. The idea is to make it transparent for whoever is looking at it.