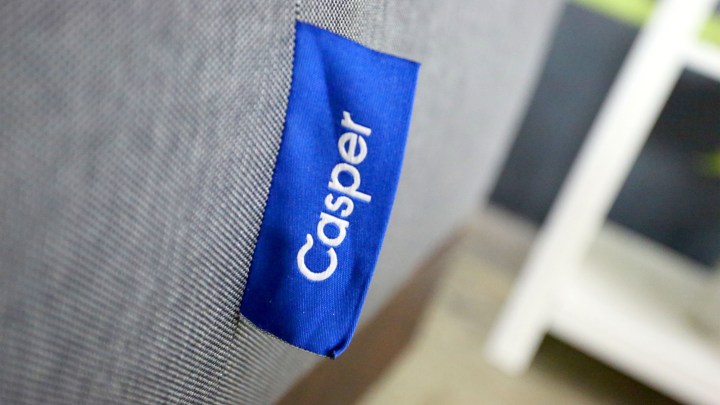 COPY
Casper, which sells direct-to-customer mattresses in boxes, has lowered the cost of its shares for its Thursday IPO. Rachel Murray/Getty Images for Casper Sleep Inc.

Casper, which sells direct-to-customer mattresses in boxes, has lowered the cost of its shares for its Thursday IPO. Rachel Murray/Getty Images for Casper Sleep Inc.
Listen Now

Casper, the direct-to-consumer mattress-in-a-box company, slashed its initial public offering price Wednesday, cutting its valuation to about $500 million. At its high, Casper was valued at more than $1 billion.

Last week, the company said it lost about $67 million in the first nine months of 2019.

Casper was once a darling of the Silicon Valley investor crowd. But things look less rosy today.

Muntz caved and gave the salesman a hundred bucks.

He was exactly the kind of customer Casper was going after when it launched in 2014, said Michael Magnuson, founder and CEO of mattress comparison website GoodBed.com.

“Casper’s story when they came to market was essentially, ‘You’re being lied to, and you’re being cheated, and we are here to save you,’” Magnuson said.

Rita McGrath, management professor at Columbia Business School, said this direct-to-consumer model was much harder before the internet.

“Consumers needed to go to a physical place to discover your product, right? Today, that’s not necessary,” she said.

The mattress-in-a-box model sounded great to Wes Muntz, especially after his in-store experience. So he and his wife, Whitney, tried it. They bought a queen-size bed online. But it wasn’t a Casper mattress. It came from a different bed-in-a-box company called Leesa.

“It was 50 or a hundred dollars cheaper than the Casper,” he said.

And now you understand one of Casper’s big problems. It wasn’t the first company to sell a mattress in a box. But it was among the first and arguably the most prominent. But the market quickly got crowded.

“Since Casper, there’s probably about 150 that have popped up,” Magnuson said. “For the most part, they were following a road map that Casper had very, very successfully laid out.”

That’s the thing about the direct-to-consumer model. It’s really easy to get into. But it’s hard to keep competitors out.