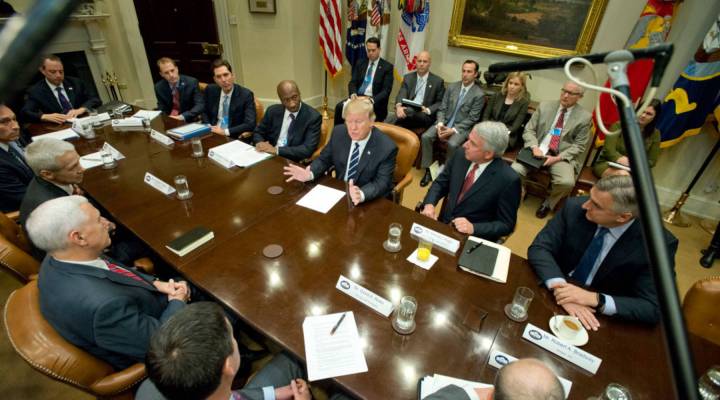 President Donald Trump met with leaders of the pharmaceutical industry on Tuesday, asking them to manufacture more of their products in the U.S. and slash their drug prices, which he called “astronomical.”

However, Trump also promised to speed up the drug approval process at the FDA, exciting some investors. Eli Lilly stock went up more than 3 percent; Amgen’s jumped by 1.5 percent.

Erik Gordon, a professor at the University of Michigan, joined us to talk about how pharmaceutical companies might respond to Trump’s plans.

David Brancaccio: So the president said the word, that drug prices are “astronomical” and the implication is he’s going to work to make them go down. Do you see an emerging alliance here between the president of the United States and Democrats in Congress who might also want drug prices to go down?

Erik Gordon: Yeah, something quite new. We now have a nominally Republican president who is saying the same thing that the Democrats are saying.

Brancaccio: And that might be about negotiating drug prices? The government is not allowed to do that now?

Gordon: Yeah. Amazingly, Medicare is the biggest single buyer of drugs. And by law, it can’t negotiate prices with the drug companies. That could change under President Trump.

Brancaccio: Importation of drugs from Canada might be allowed. So one would assume that the pharmaceutical companies would be very concerned about this.

Gordon: They should be concerned because the Republican veto might not be in place.

Brancaccio: And how might the drug companies respond? By lowering drug prices across the board?

Gordon: Well, the drug companies might be a little scared that some of their lobbying and political power has diminished. The drug companies could come to the table with some compromises, promises to lower drugs that are widely used by Medicare patients. Something that keeps the president short from pushing for legislative change that could really hurt the industry.

Brancaccio: All that said, I can’t help but notice — in fact, it’s my duty to notice — that drug companies’ stocks shot upward after this meeting with the president yesterday.

Gordon: Yeah, you know, the president made some noise about reforming the FDA — part of his less regulation theme. And the FDA has been sort of the whipping boy for the pharma industry. The pharma industry has blamed the FDA for lots of its economic woes.

Brancaccio: And clearly some stock analysts, at least, believe this could help drug company profits.

Gordon: Yeah, you know, the stock prices are pushed around more by the analysts than by anybody else. I don’t think the FDA is the drug companies’ problem. The drug companies’ big problem is they bring out new drugs that just don’t work. You know, if the drug doesn’t work, it isn’t the FDA’s problem. It’s the problem of science, and changing the FDA doesn’t change science.