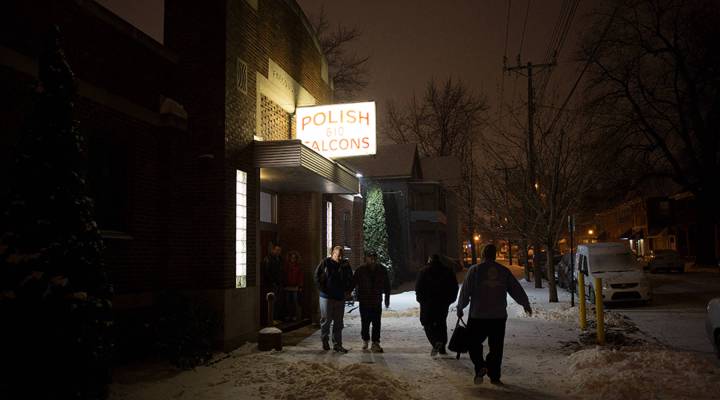 COPY
Erie, Pennsylvania was built on manufacturing, and its county went Republican in the 2016 presidential election after voting for Barack Obama in 2008 and 2012. We dropped in on the Polish Falcons Social Club, Nest 610, to chat with some voters about how their economies are going. Maitham Basha-Agha/Marketplace
How The Deck Is Stacked

Erie, Pennsylvania was built on manufacturing, and its county went Republican in the 2016 presidential election after voting for Barack Obama in 2008 and 2012. We dropped in on the Polish Falcons Social Club, Nest 610, to chat with some voters about how their economies are going. Maitham Basha-Agha/Marketplace
Listen Now

For the past year, we’ve been working on “How the Deck Is Stacked” with “Frontline” and “PBS NewsHour,” a series about the economy and the election, and what one means and has meant for the other.

Here’s what we were looking for to wrap up this series: a not-coastal county, not too big, not too small, founded on what built this country — manufacturing — trying to find its way in a changing economy.

Erie County, Pennsylvania, represents what a lot of the 2016 presidential election was about: economic dissatisfaction, lost opportunities and voters looking for something else.

Until this year, GE Transportation was the biggest employer in Erie. It made motors for locomotives and tanks, but the company cut a third of its remaining workforce in the the past couple years, jobs that paid $33 an hour with only a high school diploma or less.

But GE’s just the current headline. Manufacturing losses have happened across the area, with companies like Hammermill Paper, American Meter and Steris closing factories and announcing layoffs, and that’s just a partial list.

On a recent trip to the city of Erie, we visited the Polish Falcons Social Club, Nest 610. It’s a neighborhood gathering spot; people stop by after work for a beer or dinner and to see old friends and people from the area.

There are events every night of the week, like bingo, pool or bowling, and it’s packed on a cold, snowy January night.

Buzz Andrezeski, 69, has worked in government, manufacturing and most recently law.

Buzz Andrezeski, 69, is a lifelong resident of Erie.

“My grandparents settled in Erie, and I ended up in Erie through birth, and here I am.”

Like a lot of people here, he raised his family and put in his time. He’s a lawyer now, but it took him a while. He started night school when he was 45 and graduated more than 20 years ago.

Andrezeski is a Democrat and Clinton voter, but “of course, I wasn’t in the majority in this county that voted for her.”

Even though he didn’t see the Trump win coming, Andrezeski’s hindsight is 20/20.

“He said the four-letter word everybody wanted to hear: jobs. Anyone who worked in a shop and lost their job, they were tired of that same old sound, ‘Oh, well, we’re going to have retraining programs for you,'” Andrezeski said.

Erie’s hospitals are thriving, and some former GE workers are preparing for a career in the health care industry.

“Well, if all your fingers are the size of your thumbs, it’s hard to be a practical nurse for some guys,” Andrezeski said. “You know what I mean? It just don’t work. A guy wants what he had. What he had was a paycheck he could support his family. Now he’s out there working two jobs wondering what’s going to happen next. Tough.”

Joe Koehle is in the industrial flooring business. He’s cautiously optimistic that new money in oil and manufacturing will make its way into Erie.

“We’re a manufacturing town, we need manufacturing. We need people to produce things. When people are spending money, big money, capital money and of course, a lot of the stuff that I sell kind of hinges on the price of oil and the gas. When we start producing more, do more fracking, start producing more gas, more oil, more equipment to do that is going to be made, and I’ll be supplying coatings for some of that stuff.”

“I’ve never seen a President-elect so active. I mean, literally within hours after being elected he’s already influencing events. Personally, I can’t stand the guy. I think what he’s up to, the people that he’s surrounding himself with, it gives me a lot of positive vibes that he’s going to somehow the job is going to get done. He’s upsetting everything, which I think we need.”

Johnette Kent is retired from a government job and works at the Polish Falcons part time. After two layoffs, her husband has had a hard time finding full-time manufacturing work.

Johnette Kent has lived in Erie her entire life, but, “Erie today is not the place I grew up in.”

She’s retired from the state’s Department of Public Welfare and works at the Polish Falcons part time.

“When I was a kid in high school, any guy could walk out of school at 16, get a job at Hammermill … American Sterilizer, GE, make a livable wage and not need a high school diploma,” she said.

“My husband had worked for American Sterilizer, Steris for 37 years. He started when he was 17. They left for Mexico. He was too young to retire. He had to find a new career. Since Steris, he has never gotten a high-paying job. He was just downsized from another company this year, and now he’s working three days a week, $8 an hour as a parts’ chaser. That’s sad because he is a CNC operator, highly skilled machinist and can’t get a decent-paying job in this area.”

Most of the decent-paying jobs in Erie now come from local hospitals and Erie Insurance, industries that require skill sets different from the ones a lot of the lifelong residents of this city have.

The city of Erie, Pennsylvania, is reliably blue, but tomorrow, we’re heading out of the city into Erie County, where the towns are smaller and the jobs are fewer.

Correction: A previous version of this story misattributed two quotations by Buzz Andrezeski. The text has been corrected.