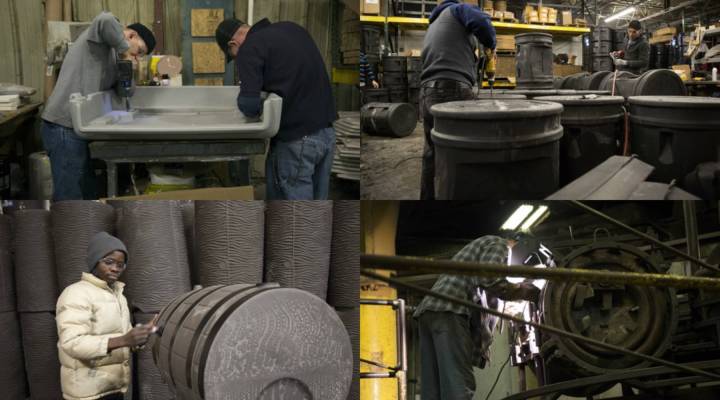 COPY
Factory workers at Erie's Sterling Technologies in 2017. Maitham Basha-Agha/Marketplace
How The Deck Is Stacked

On Thursday’s live show from Erie, Pennsylvania, we introduced you to a county that voted for a Republican presidential candidate for the first time since 1984.

It’s for our series, “The Big Promise,” a yearlong reporting project based in Erie County. We’re looking at what happens in a place where the economy’s changing, manufacturing jobs have left and voters are counting on the promises the president made during the campaign.

Business is good, Learn said. This is the company’s busy season. Twenty-four hours a day, workers pour powdered resins into molds that cook in room-sized furnaces.

It’s 15 degrees outside, but there are guys on the factory floor wearing shorts and T-shirts. In the summertime, temperatures exceed 100 degrees.

Larry Allen leads one of the teams working the machines.

“The guys … working for me, they come in here and they break their backs; they bust their balls,” he said. “I wouldn’t trade them for nobody else.”

Allen has worked at Sterling for just two years. In that time, he worked his way up from the bottom, polishing and blow-torching the finished products.

Allen said jobs at Sterling are good jobs, “Especially because everything is here — it’s American made, it’s right here.”

This is what Trump has been promising: more jobs like Allen’s, American manufacturing companies with American workers.

At Sterling Technologies, workers start out making $8 to $14 an hour.

Michelle Szymecki, 38, has worked here for five years. She does what Larry Allen used to do — she gets rain barrels ready for market. Szymecki said in Erie County, Sterling’s wages are pretty good. But that doesn’t mean it’s necessarily enough to support a family.

“I have kids at home,” she said. “It’s not a surviving wage if you have a family, no. If you’re single, sure. It’s a good wage to have. You’d be able to get a car, maintain a house. Things like that.”

But Szymecki and her partner make it work. She likes her job — the hours, the co-workers.

Szymecki grew up around here. She started working when she got out of high school.

“It’s hard to find a job out here,” Szymecki said. “It’s nice to have Sterling out here because it’s one of the main employers out here…. There’s not many places out here that hire consistently.”

Sterling has about 160 employees. The company plans are to add another 70 jobs over the next couple of years, according to President Cary Quigley.

“With the current administration, we’re anticipating anywhere from 10 to 17 percent growth each year,” he said.

Quigley is excited about the next year under Trump.

“The CEO and owner of the company lives in South Dakota,” Quigley said. “The morning I voted, I then jumped in a car and I drove to South Dakota. I stopped in North Woods, Iowa, to sleep that night and started watching the results from the election, and stayed up and stayed up. And there was a group with me, and we were like… we couldn’t believe it. Christmas has come early. We’re ready for it, we’re ready for the change.”

Quigley said the last eight years have been tough — the aftermath of the recession and competition from Canada. At one point, the company was down to just 12 workers.

“We encountered a month where I sat down with the CEO and the owner and his wife, and we were literally talking about shutting the doors,” Quigley said. “We talked about it and we said, ‘Well, let’s give it another six months.’ The next month was one of our best months in company history, and we’ve really taken off since then.”

Taken off, with one big caveat. Quigley said the Affordable Care Act has been hard on the company.

“It’s painful. It’s painful,” he said. “As a small business, it’s very difficult to look at how that cost affects our bottom line, which is a tight-lined business as it is. It’s very thin-margin business. When we had to look at health care and the cost of what that health care meant to us… loss to our bottom line was greater than our budgeted net profit was for the year. You say Obamacare and I feel immediate pain…We’ve survived it, we’ve been fortunate, but it’s not been good for our business.”

Quigley said he’s hoping for relief under Trump and the new Congress. Quigley has already budgeted funding for this year. Next fiscal year, though? He’s going to be reworking his commitment for sure.

We’re going to be in and out of Erie County over the next 12 months to see whether Trump supporters get what they were promised. It’s for our series, “The Big Promise.”

This story was produced as part of our election series, “How the Deck is Stacked,” in collaboration with Frontline and PBS NewsHour. You can find more stories related to this series here.