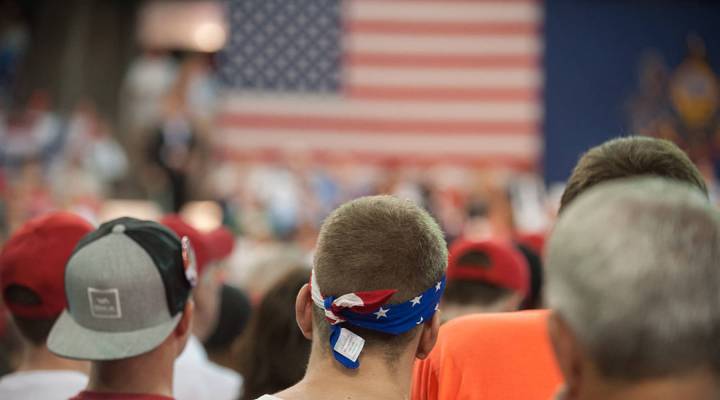 COPY
An attendee with a flag bandana made in China wait for Republican candidate for President Donald Trump to speak at a rally at Erie Insurance Arena on August 12, 2016 in Erie, Pennsylvania. Jeff Swensen/Getty Images
Final Note

An attendee with a flag bandana made in China wait for Republican candidate for President Donald Trump to speak at a rally at Erie Insurance Arena on August 12, 2016 in Erie, Pennsylvania. Jeff Swensen/Getty Images
Listen Now

There was a lot to think about in the economic threads of President Barack Obama’s goodbye last night in Chicago: wages, income, home values, retirement accounts are all rising again, poverty is falling again, the wealthy are paying their fair share of taxes, and the unemployment rate is near a 10 year low — it’s all true.

On my trip out to Erie, Pennsylvania last week, though, there are echoes of a different attitude.

Erie is an old-line manufacturing county that went Obama, Obama, Trump in the past three election cycles. I had breakfast with a bunch of old-timers, including Norm Troyer, who had the following to say about the economy:

This election was absolute revolt. Look across the midsection of the United States. The coastal areas, they have their cozy little deals going on. You don’t make $30 an hour in our town. More like $10 or $15 if you’re lucky to have a job.

You would have seen Mr. Trump, even though he’s not in office yet, make some very bold moves. But, you know, he represents more of us — the common ordinary person. He’s not a professional politician. So we have to hitch our wagon to that hope that this revolution can bring something to us. I’m not talking about Republicans or Democrats, I’m talking about us. All of us.

That’s kind of the economic nub of this whole thing, right? Admittedly, Obama did talk about the deeply corrosive effects of rising income inequality, wages that’ve been stuck for decades and lots of other not so good stuff — but the enduring fact is that those beaming headline numbers don’t, and didn’t mean anything to Norm Troyer, and millions of voters like him.

We’re doing a series of stories from Erie and its surroundings next week, including a live show there next Thursday — a day before Inauguration — kicking off our coverage of Donald Trump’s economic promises.