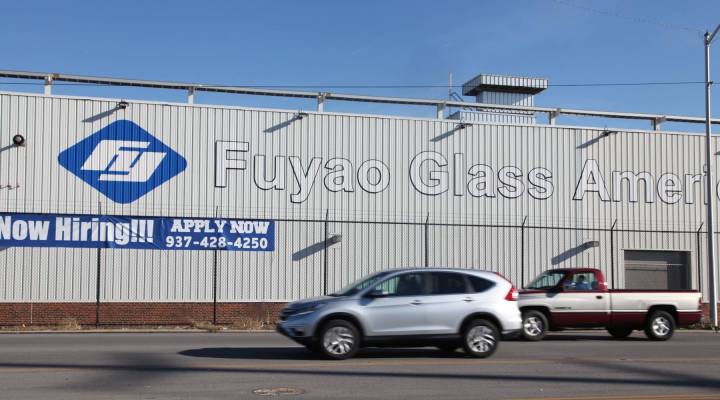 ‘Working class’ and ‘Rust Belt’ have been buzzwords lately. Perhaps you’ve heard the theory that working-class voters in the Rust Belt ushered Donald Trump into power.

Of course, the reality is more complicated than that: lots of working-class people are people of color, and New York Times exit polls show some of the group voted overwhelmingly for Hillary Clinton. And many parts of the so-called Rust Belt are doing okay economically, at least based on markers like unemployment, or poverty.

Montgomery County, Ohio, straddles those racial and economic divides: it’s split among urban, rural and suburban voters, and it’s multiracial, 40 percent black with a lot of poverty and a middle class. This year, for the first time in almost 30 years, the county went Republican in a presidential election.

When I met Robin Pink at a Mexican restaurant in a northwest suburb of Dayton, she was dressed for church and just coming from getting her nails done. Robin works in a union job at a Miller Coors brewery nearby, and said she makes upwards of $80,000 a year with decent job security and good benefits. But I heard something from her that I’ve heard here in the midwest, in the so-called Rust Belt, countless times:

“I don’t know how people are making it today,” she said. A lot of her family and friends work multiple jobs for not enough money. And in Dayton, there’s a big black-white divide: black people live on the west side, whites on the east and in the suburbs. A lot of the jobs have left the city, especially the west side, and so working typically means a long commute to a whiter part of town. Pink is black, and she said in her community, there’s a feeling that politicians aren’t addressing the economic issues and haven’t been.

Robin Pink, who works at a Miller Coors brewery outside Dayton, doesn’t think Donald Trump will do much for the working class.

“When they want us to vote for them, they’re all about the people then,” she said. “But after that, they do absolutely nothing for the people.”

She voted for Hillary Clinton, although she says in the past she used to split her votes between Republicans and Democrats, choosing the candidate she thought was best; since Obama has been in office, she’s shifted to a straight ticket, frustrated with Republicans efforts to block any legislation he supported.

But Democratic votes for president in Montgomery County this year were down 9 percentage points from 2012. Turnout overall was lower than 2012 and 2008, and Donald Trump won the county with fewer votes than Mitt Romney had in the last election. Contrary to the theory that a large working-class vote turned out to swing things for Trump, in this county, a large working-class vote seems to have stayed home or voted for Gary Johnson.

Michael Gessel with the Dayton Development Coalition is one of the people who has been trying to get jobs to come here since way before there was a Donald Trump on the scene.

“The jobs are fewer in number, the jobs don’t pay as much, and, this is the critical thing, the jobs require skills,” he said. His organization and other local economic development agencies have focused on workforce development, on securing funding for the military base here, and on expanding the health care and education sectors. The region has also marketed itself as a place that welcomes immigrants and diversity; an organization called Welcome Dayton does outreach to immigrant communities to encourage them to move there and help revitalize the economy.

Plus, there is still manufacturing: Dayton has lots of high-tech small businesses and a large Chinese automotive glass factory that’s been hiring by the hundreds since it opened in 2015. But the Chinese factory is in a former GM truck plant, where even entry-level, low-skill jobs used to be union jobs with a living wage. Accounting for inflation, entry-level wages at the new factory are half what GM used to pay, and employees are initially hired through a temp staffing agency.

Of the tens of thousands of secure, high-paying factory jobs that don’t require technical education, Gessel said, “those jobs are gone.”

Some of that is due to offshoring, but a lot of it is about automation — working in a factory these days means working with more computers and robots and fewer people.

Kate Geiger has seen the shift towards automation throughout her career.  “If you put 50 robots in to do 50 jobs, that’s 50 people that aren’t getting hired,” she said.

Geiger was laid off in ‘08 from Dayton’s GM truck plant here, and left with a reduced retirement, but now she also works at Miller Coors. She’s actually on Robin Pink’s team there.

We talked at her ranch house in a rural corner of the county; she’s white, and she said jobs are part of why she voted for Trump, but she also wants to see the federal government shrink.

“We need somebody to downsize it. And Trump’s the man to do that. That’s what he does.”

She also said she’s very worried about other issues: gun rights, crime and terrorism, although she said she doesn’t want Trump to deport millions of people. “I don’t think he really means that, I really don’t,” she said. “I think he means terrorists.”

It’s not just undocumented people who have been discussed in this campaign: the FBI’s latest report shows a spike in hate crimes against Muslims, and Trump has promoted a policy of banning Muslims, including refugees, from entering the country. Dayton has a growing population of Muslims, some of them refugees, some U.S.-born. Kate said she’s never known someone Muslim, but, “if I were a Muslim woman, and I didn’t know me, I’d be scared of me.”

Even so, for her, this vote feels separate from religious identity or race: she says it’s about morals and the economy. For her co-worker Robin Pink, those things can’t be separated.

“This country has been about race from the beginning,” she said. “You know, that hasn’t changed.”

She doubts Trump will lift up the economic prospects for working-class people whoever they voted for: raise wages, bring in better jobs, fix education.

“Until he make that happen, they’re in the same boat that I’m in.”

For her family, the ones who are just scraping by, she said she just prays.