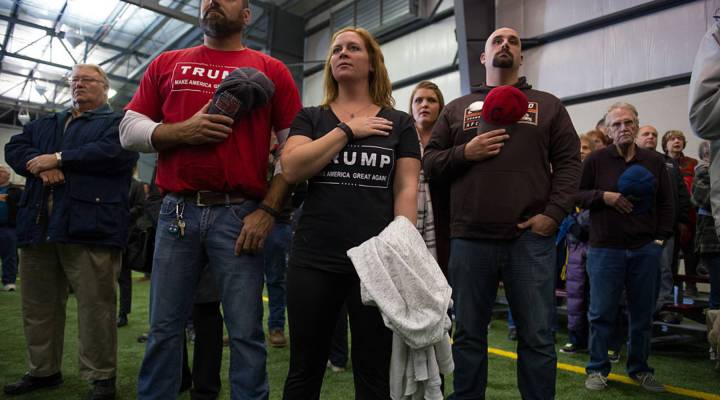 COPY
Supporters pledge allegiance to the flag before Donald Trump speaks at a campaign rally in October at the Spire Institute in Geneva, Ohio. Jeff Swensen/Getty Images

Supporters pledge allegiance to the flag before Donald Trump speaks at a campaign rally in October at the Spire Institute in Geneva, Ohio. Jeff Swensen/Getty Images
Listen Now

When Joe Del Signore Jr. opened his catering business back in 1987, the coal and steel mines of Johnstown, Pennsylvania, were booming. But over the years the area lost thousands of jobs, Del Signore said.

“The industries all closed down or moved out of the area,” he said. “And, of course when you lost people — there goes your customer base.”

Now, to get customers, Del Signore has to work a hundred mile radius around Johnstown.

His father always told him not to talk politics. But this year he ignored that; Del Signore registered Republican and put a Trump sign in front of his business. Nobody complained.

“I got all positive feedback on it, too, because people in this area do realize that we do need a change,” he said.

What kind of change?

“Well, I think they would like to have decent jobs,” said Allan Meltzer, a professor of political economy and public policy at Carnegie Mellon University in Pittsburgh. “Jobs that will provide a family living.”

Meltzer noted that Trump promised lower corporate taxes and less government regulation, and together those could bring in more private sector investment and jobs.

But old-fashioned manufacturing, like in the ’50s and ’60s, won’t be coming back to the Rust Belt, according to Chad Bown, a senior fellow at the Peterson Institute for International Economics. Factory production is different now, Bown points out.

“It’s done now through automation and computers and robots that require many, many fewer people to actually do the work,” he explained.