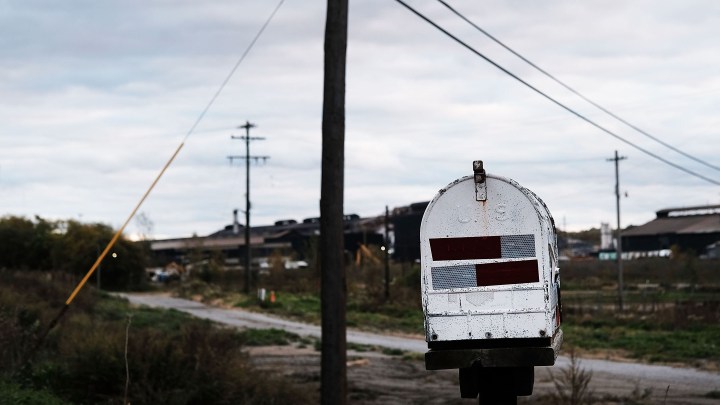 COPY
Those who have chosen to stay and work to revive Youngstown are chronicled in the new "America ReFramed" documentary "The Place That Makes Us," directed by Karla Murthy. Spencer Platt/Getty Images

Those who have chosen to stay and work to revive Youngstown are chronicled in the new "America ReFramed" documentary "The Place That Makes Us," directed by Karla Murthy. Spencer Platt/Getty Images
Listen Now

The deindustrialization of the Northeast and Midwest in the 1970s left Youngstown, Ohio, scarred with abandoned factories, high unemployment rates and dilapidated neighborhoods.

Youngstown’s declining economic situation led many former residents to flee for greener pastures. And while there have been notable attempts to bring the city back from economic ruin, they haven’t been completely successful.

But there are some Youngstown natives who have chosen to stay and work to revive their city, as chronicled in the new “America ReFramed” documentary “The Place That Makes Us,” directed by Karla Murthy.

Murthy spoke with Marketplace Morning Report host David Brancaccio about why a new generation of Youngstown residents are staying where they are. Below is an edited transcript of their conversation.

David Brancaccio: I was just looking up the old scripts. I last reported from Youngstown — I mean, it’s off and on over the last 10 or 11 years, but what I found was people running on hope. They were trying to work with the local university to try to make a tech hub in Youngstown. You’ve just spent three years in and out of there. How’s it going?

Karla Murthy: There is progress that is being made. I mean, that was one of the reasons why I wanted to go there was to show that progress. So back when you were probably there 10 years ago, that was when a lot of these groups were just starting out, one of the main nonprofits that we followed, and, you know, their work is to rehab a lot of the vacant, blighted homes across the city. And, you know, it’s slow, incremental work, but it is all adding up and it is making a difference there. And that was one of the main things we wanted to show in the film.

Brancaccio: And even before pandemic, of course, money is hard to come by. They were having trouble, I think your film shows this, just getting the money to knock down abandoned properties?

Murthy: Yes, I think one of the things that they’ve learned over the years is how to make this work sustainable. And so the group that we follow, the Youngstown Neighborhood Development Corporation, YNDC, you know, they’ve had to change their model over the years. And instead of relying perhaps more on government subsidies to rehab these homes, they change the model so that, you know, they’re acquiring homes, sometimes at zero cost from the land bank or getting them by donation. They have an in-house construction crew that’s doing all of this work. And that means that they’re able to make the numbers work, and are able to then sell these homes at really affordable prices that people can pay for. I mean, their main goal right now is to improve the people’s lives who are living there right now and to stop people from leaving. That is still a problem there, as it has been since the mills began closing, you know, when you had over 50% of the population leaving. So their goal is to stop the hemorrhaging and just improve the quality of life for everyone who’s living there right now.

Brancaccio: There was some hope a decade ago of getting part of the Youngstown diaspora, I guess we could call it, back to Youngstown, to attract some of the brain drain back in the other direction. Any luck with that?

Murthy: You know, you’re not seeing an influx of people. But one of the things that surprised me was that the work that was being done, the revitalization work, was being done by a generation of residents who did have the chance to leave. Many of them were college educated, and they were choosing to stay and do this work. And that was really surprising to me, it was going against that brain drain trend. And these are people that are fiercely loyal to their hometown and committed to to making progress in the town. And I was really intrigued by that, you know, just personally, as a filmmaker. I’m the daughter of immigrants. And, my father’s from India, he was a homeless street kid, and my mother came from the Philippines to work as a nurse. And I don’t have that same connection to home that they did. And so one of the reasons why I was drawn to making this film was to kind of see what that looks like and feels like and look at the reasons why people choose to stay when they have the choice to leave.

Brancaccio: Because people on the outside looking in may see the decision to stay in a town with such challenges as irrational. But, first of all, you have what you’re talking about, the value of a place you could call home, you have personal connections, but also it’s expensive to uproot. I mean, if you go to a new place, you have to have security deposits, you may not have cousins or uncles or aunts willing to do extra babysitting. It’s just not that easy to leave sometimes.

Murthy: Exactly. I mean, and Youngstown is extremely affordable. And I think this generation that’s doing this work sees that. They see the opportunity. I mean, their parents’ generation, they remember the mills being open, and they’re kind of haunted and traumatized by watching their way of life crumble around them. And this generation, they have no memory of the mills ever running and the smoke billowing out. That is not a part of their memory at all. And they literally grew up in the rubble. And I think because of that they have a different vision: They can see beyond that, and they can see a way forward and they see opportunity in that rubble. And they always tell me, like, you can make your dreams come true in Youngstown if you just put in the work in the effort, because there’s so much opportunity there that people don’t see often or take for granted, unlike their parents’ generation, who are still kind of trapped and haunted by what Youngstown could be. This generation is kind of looking around them and seeing the assets that are there now and trying to build on those assets, like Mill Creek Park, like the natural beauty in the places and these beautiful homes. So it’s a different kind of mindset I think that we’re seeing there.

Brancaccio: One of the paradoxes of the pandemic time is that we’ve all been reminded that you can do a lot of what needs to be done in this world remotely. And I guess if a house is cheap in a place like Youngstown, and you could work remotely, that would help a region like that.

Murthy: Yeah, that is true. And, you know, the pandemic definitely has shifted the work that YNDC is doing. They don’t just rehab vacant homes. They also help owner-occupied homes, that’s actually the majority of work that they do. And so during the pandemic, they were doing a ton of roof repair work, because you can be outside to do that. And then they were actually doing more houses, rehabbing more vacant houses, by splitting up their crews, so that, you know, people didn’t have to be all be crowded in one house working at the same time. Yeah, they’re continuing to do the work throughout the pandemic. They’re also offering, you know, mortgage assistance for families in crisis. You know, they still do housing counseling and things like that. So, yeah, there’s still some huge challenges there. But they were able to kind of shift the work that they do to, to keep making an impact in the city.

Brancaccio: So they have people committed to the future of the region. But that isn’t quite enough. What industry do they hope, or what are the industries they hope, will drive this forward? I assume there’s still connections with the local university.

Murthy: Yes, Youngstown State is there. But that is a huge problem. And that’s, you know, continues to be one of the bigger problems facing the region as a whole. I mean, we just saw, you know, what’s what’s going on in Lordstown with the former GM factory there. I mean, that’s, that’s all the Mahoning Valley. Our film acknowledges those problems. But I think our goal was really trying to show the work that’s still being done and that can be done on a much smaller scale. And Ian is, you know, one of the main characters of the film, and he is the executive director of the Youngstown Neighborhood Development Corporation and his family goes back generations in the area, four generations of industrial workers.

There’s a moment when Ian’s older brother Josh comes back, and he lives out in the Bay Area. And he’s like, there’s a huge housing problem there, too. And it’s, you know, it’s a completely different end of the spectrum than Youngstown. And Ian’s response to me really sums it up, which is that, yeah, there are these huge problems that are facing the country, but I’m not going to let that stop me from doing the things that I can do. We can still fight. And so that’s what this film is about showing like the small things — the one house that can be rehabbed, helping one neighbor out, mentoring one child — all of those things can add up to meaningful change.

Brancaccio: You know, a decade or so ago, when I was there, there was this idea of “Rust Belt” chic: the coolness of a crumbling place, and maybe that itself could be a draw. People not loving the term “Rust Belt” anymore in a place like Youngstown?

Murthy: Yes, that’s what I found. And I was kind of surprised by that, because that is just how generally most people refer to that region of the United States. And I think for the people living there — I mean, would you want to live in a place that’s known as the Rust Belt? I think for the people who are trying to do this work and improve their towns, you know, that term just means you’re dwelling in the past. And most of the mills in Youngstown that are now closed, most of them have been demolished. There’s probably only one left. So there is no rust. So yeah, they’re trying to move forward. And I think that term for them, it feels like it’s holding them back and it’s the outside. You know, people define them from the outside as opposed to how they see themselves.