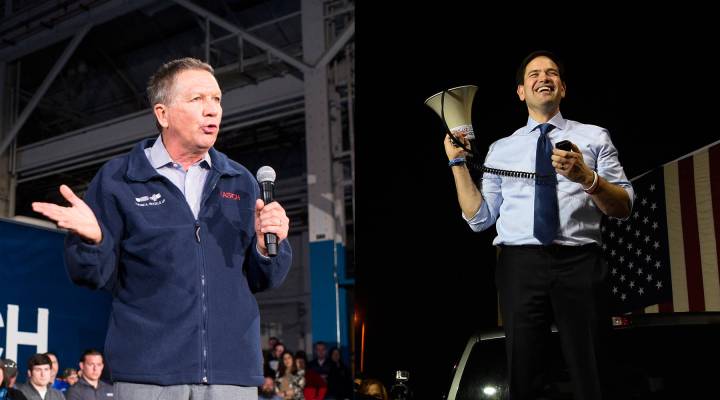 The primary season is full of milestones, real and and imagined. We’ll see the former tomorrow as two of the four remaining GOP candidates, Florida Sen. Marco Rubio and Ohio Gov. John Kasich fight to win their home states away from front-runner Donald Trump. Missouri, Illinois and North Carolina are up for grabs too.

Like we did on Super Tuesday, let’s take a look at the economies of the two major states, Florida and Ohio. Both have a large number of delegates and winner-take-all voting systems, which means a candidate only needs a majority of votes to claim all the votes of a state.

A state of retirees and vacation spots — and, oh yeah, ground zero for the housing bust — Florida was hit hard by the Great Recession. When people are losing their homes and their jobs, they can’t exactly afford to retire or visit Walt Disney World.

“If you think of the Florida business model, it’s been tourism, construction, certainly agriculture but it’s not a big driver,” thanks in part to citrus greening, said Christopher McCarty, director at the Bureau of Business and Economic Research at the University of Florida. There’s been a sense the state needs to diversify, with more emphasis on ports and rail.

It’s taken years, but the state is finally coming back from the brink and unemployment is around the national average. There’s also still plenty of dead housing stock, McCarty said, though foreclosures are under control. Governor Rick Scott has run on jobs, and hundreds of thousands have returned to the state, but like the rest of the country, wages and work force participation in Florida are still flagging and the new jobs don’t pay as well. McCarty also notes that Scott — and to a lesser extent, former presidential candidate Jeb Bush — moved into the governor’s mansion after unemployment had bottomed out.

Courtesy: University of Florida Bureau of Business and Economic Research

Meanwhile, Ohio’s economic recovery was a part of Kasich’s presidential campaign before it even started. He’s run as a moderate-ish republican job creator, tax cutter, and budget balancer. But like Bush and Scott in Florida, Kasich’s timing was good, and some in Ohio say he’s exaggerating his accomplishments.

Kasich took office in 2011, when jobs were already starting to come back to Ohio. The rust belt state has seen a manufacturing comeback, and median household income has grown faster than the rest of the country, though employment has not.

The governor also touts that he pulled Ohio out of an $8 billion hole and balanced the budget while cutting taxes. In a lengthy fact-check of Kasich’s claims, Politico notes that state laws mandate a balanced budget, and the size of the Ohio’s shortfall was up for debate. Kasich also raised sales tax as he cut income and estate taxes.

“I want Ohio to succeed as much as anybody, but you can’t just cherry pick numbers and call it a comeback,” said Gavin DeVore Leonard, state director for public service advocate One Ohio Now told Politico.