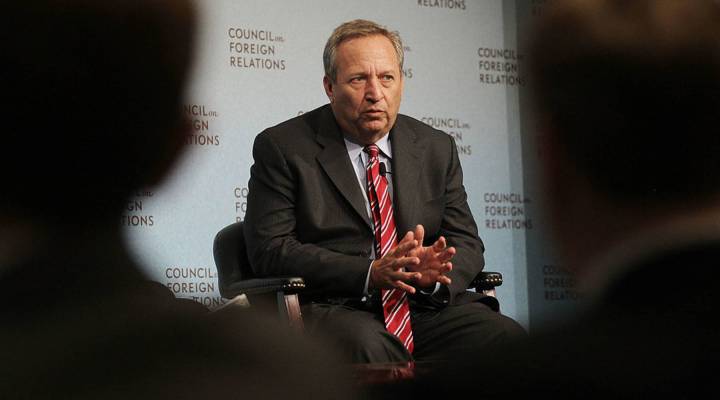 President-elect Donald Trump and Speaker of the House Paul Ryan have made it clear that an update to the tax code is on their agenda — corporate tax policy in particular.

The update part is not all that controversial, but the how to update part is. Lawrence Summers was Secretary of the Treasury for President Clinton, an economic advisor in the first Obama term and now a columnist at the Washington Post. His most recent piece is “Trump and Ryan are right to tackle corporate taxes. But their approach would do harm.”

Marketplace Host Kai Ryssdal spoke with Summers about why he thinks the proposed tax changes are a bad idea. Below is a transcript of their interview that has been edited for brevity and clarity.

KAI RYSSDAL: We should say here, right at the outset, you agree with President-elect Trump and speaker Ryan that corporate tax reform is a thing they’ve got to tackle right a way, right?

LAWRENCE SUMMERS: I do very much agree that there’s a strong case. We’ve got the highest rate in the world. We don’t raise as much revenue as we would like to, two and a half trillion dollars sits outside the country. It’s hard to believe that we’ve got the right system.

RYSSDAL: Well then what just in layman’s terms is Speaker Ryan proposing and what’s wrong with it?

SUMMERS: He’s proposing a radical change in our existing institutions and, in particular, a major step to change the taxation of exports and imports that would do great damage to firms in our country that import and sell to consumers. Retailers for example would put exporters quite likely in the situation of running tax losses on a near permanent basis. The effect of this, quite possibly, would be to put a spike into the dollar which would cause substantial financial uncertainty and issues around the world as well.

RYSSDAL: Let me ask you this, sir: if I’m a farmer in Iowa or somebody working in Silicon Valley or somebody just trying to get by, how does this affect me?

SUMMERS: Depends on exactly where you are. You may lose your job if you’re one of the firms that’s going to be substantially damaged. You may end up being “lucky” because you may find yourself pay higher prices for consumer goods. You may end up being one of the lucky winners as the tax feeds through. But I don’t think this is a time to throw everything up in the air.

RYSSDAL: How does this line up with President-elect Trump stated aims of being tougher on China and protecting American jobs and tariffs and trade protectionism and all of that?

SUMMERS: I mean it depends on how it feeds through exactly how it’s implemented. But I think there’s a real risk that it’s not going to end up having the benefits that are hoped. There’s a real chance that it will push the dollar up very substantially and if it does that, that’s going to make it harder for American areas to compete. If the dollar goes up 15 percent against the Mexican peso, as it has since President-elect Trump was elected, it means that anybody deciding whether to locate a factory in Mexico or Ohio is going to find Mexico 15 percent cheaper than they did before.

RYSSDAL: Give me your sense of with this economy near full employment inflation low jobs rising and basically things proceeding apace, what do you make of the president-elect’s plans for economic growth and stimulus in this economy?

SUMMERS: They’re not very well spelled out. Certainly we need to do more to promote growth and I agree with the president-elect about that. But I am very worried that the consequences of these particular proposals will be to channel the benefits to those at the very high and with very limited benefit for most Americans. And I think some of the deregulation risks ushering in another financial crisis.

RYSSDAL: That’s a fairly grim ending to this interview.

SUMMERS: Well, I think it’s going to be a difficult time. If we know anything, it is that populist policies can easily lead to short run benefits with very big long run costs.