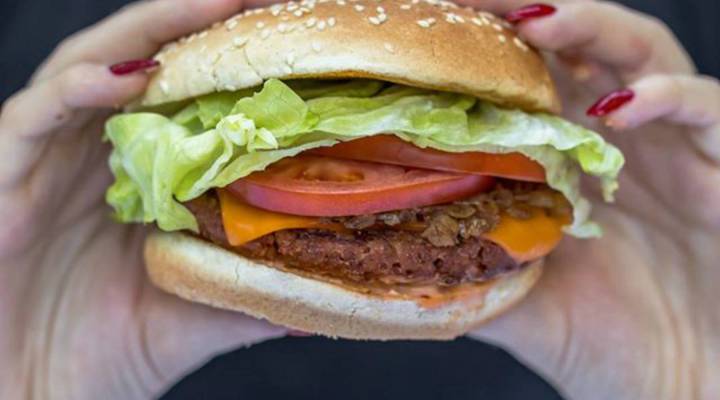 COPY
The VG Beyond Burger is one of the vegan fast-casual options at West Coast chain Veggie Grill.  Courtesy Veggie Grill

The VG Beyond Burger is one of the vegan fast-casual options at West Coast chain Veggie Grill.  Courtesy Veggie Grill
Listen Now

Vegan fast-casual chain Veggie Grill has found success on the West Coast. Since it was founded in 2007 in Irvine, Calif., the restaurant has opened 28 locations in California, Oregon and Washington. The chain recently completed a $22 million round of fundraising, and is now gearing up for a nationwide expansion, planning to double the number of locations in the next three years.

As Veggie Grill heads into new territory, the question of whether the rest of the country is ready for a vegan fast-casual concept lingers. Veggie Grill CEO Steve Heeley is confident in the expansion, which will focus on big cities in the Midwest and on the East Coast, as well as targeted airports and college campuses.

He talked to Marketplace Weekend host Lizzie O’Leary about the company’s next steps.  Below is a transcript that was edited for clarity and brevity.

Lizzie O’Leary: You all served fast casual vegetarian food and right now you’re on the West Coast. How do you plan to expand nationally?

Steve Heeley: We’re up and down the West Coast today, from San Diego through Seattle. But over the next few years we do want to bring our brand to the East Coast and throughout the country Midwest, for sure.

O’Leary: Do you think that the rest of the country is ready for a vegan chain?

Heeley: Absolutely. And the growing trend around vegetarian food and eating veggie diet or plant based diet or vegan, whatever — however you’d like to describe it — is a growing trend especially in big cities. There’s a lot of our core consumers clustered in those big cities.

O’Leary: When you think about your consumers who are they?

Heeley: Well interestingly enough, you know, we do attract vegans and vegetarians, but about 80 percent of our guests don’t consider themselves vegan or vegetarian. They’re what we call “veggie positive.”

Heeley: Veggie positive. Which means that these are folks that are mindful about how they eat and they’ve made a conscious decision to move veggies grains fruits and nuts to the center of their plate. They could be flexitarian, pescatarian, they could just decide that “Hey, I don’t want to eat red meat, I want to eat more veggies,” and I think intuitively people know that eating more veggies is good for you.

Heeley: We’re a vegan concept and always will be. And I think our vegan or vegetarian guest understand that and they depend on us for that. But I think where we come from is — we start out with “What do our guests want to eat today?” And so we come at it from the food first and then what we do is as we engineer it so that it’s vegan. So we do a lot of product development. We do four seasonal menus a year so I’m always looking for what are the interesting flavors and foods that our guests are looking for, and how can we innovate and be creative and bring them things that maybe are really surprising, that they didn’t know that they could get at a vegetarian restaurant.

O’Leary: When you think about positioning yourselves, are you sort of aiming for the, Panera Bread slice of the market or the McDonald’s slice of a market? Because they’re very different things.

Heeley: Very different. You know McDonald’s, I think, is mass market. So it’s this food that’s inexpensive and you can appeal to a very, very, very, broad audience. I think what Panera has done is they have broad appeal, but it’s more for a more discerning guest that wants more fast casual experience. I think we consider ourselves what we call “polished fast casual.” Our food, it’s not easy food to produce. So a lot of times it’s on the edge of chef-driven. We do have a lot of things on our menu that are very familiar to people. Things like our Santa Fe Crispy Chickin’ Sandwich. But from a quality perspective, starting with quality of ingredients and freshness, and everything’s made from scratch and we don’t make the food till you order it. We’re aiming at more of the discerning guests that  is very food conscious and wants high quality food, but they also want things that are familiar. So people can come to Veggie Grill and get order buffalo wings, and it’s a great flavor that you expect from buffalo wings. But on a different occasion a guest might order a Quinoa Power Salad, which is very veggie-centric. I think we’re sort of redefining a genre around our food.

O’Leary: How do you have high quality ingredients and sort of chef-centered or handcrafted food, and keep your prices down? Because your prices are pretty reasonable.

Heeley: It’s challenging because we use a lot of specialty ingredients so they naturally come in at a higher cost. And so you know it’s always a balance of price versus quality, but we try to engineer a purchasing and supply chain, and our vendor partnerships, so that we can keep our food affordable and guests can come in a lot, and we do have a lot of highly frequent guests. We’re not inexpensive, but we’re not overly expensive as fast casual goes.

O’Leary: You just raise $22 million in a recent funding round, what’s the pitch you’re making to investors about why it’s a good bet to put money behind expansion?

Heeley: Well actually, a lot of our investors really understand trend and the trend around plant based eating especially with millennials, and the rising tide of millennial spending. Vegan and plant-base and all that, which used to be on the fringe, is now going mainstream. So there’s a lot of sort of critical mass going on around this movement to eat more plant-based items. I think over the next couple decades eating this type of a diet and this type of food is going to be more mainstream than probably a carnivorous diet today.

O’Leary: But you don’t put that into your pitch to diners really.

Heeley: We don’t. I mean we want to be all inclusive. So sometimes you can attach labels to your food that people can misinterpret. So if you go to market and say we’re vegan, that for some folks if you’re vegan or a vegetarian, you can say ‘wow that’s great.’ Other people that maybe haven’t tried Veggie Grill or don’t really understand our food might see vegan and go “Oh, vegan, hmm, you know some of that vegan stuff I’ve tried doesn’t taste very good,” or you know they tend to think about brown rice and steamed broccoli as vegan food or raw food. And so we call a veggie-centric because we don’t want to exclude those folks that just want eat more veggies and they want great flavor and great food and they don’t want labels attached to who they are and how they eat.

O’Leary: Part of your expansion plan centers around airports and university campuses. What? Why those places?

Heeley: Well actually universities we’ve been getting a lot of inquiries because the student population today has a very different perception of a veggie-based food and it’s actually based on demand. So you have these student populations that are saying “We want veggie options.” That’s a big interest there and then in airports I think today’s traveling consumer, they’re kind of tired of — and I run into this myself when I travel — trying to find something that is better for you and is flavorful in an airport can be challenging. So we think there’s an opportunity to go into airports because those folks travel a lot.

O’Leary: When you look out at your expansion how do you see as your competitor?

Heeley: It’s a good question. A lot of brands are now coming to market with better for you options. They’re coming to market with a lot of vegetarian options. And we don’t necessarily see that as competition. We see that as widening the audience for this type of food. I think what we do is very different than some of the other brands that have vegetarian options. We consider ourselves the experts and the innovators.