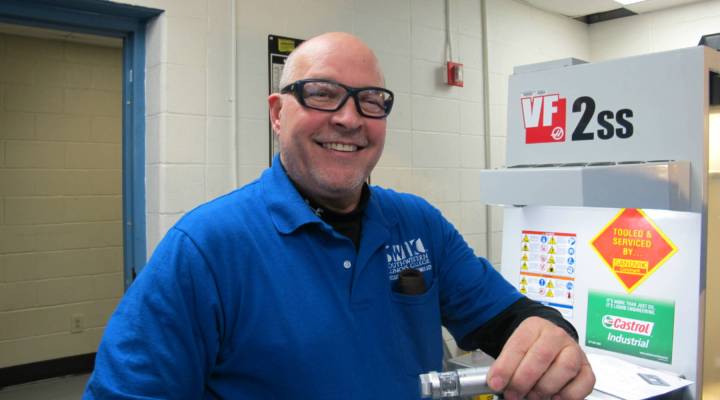 COPY
Martin Oliver worked in the steel mill in Granite City, Illinois for 22 years before he was laid off last year. Now he's training to use computer-driven machine he hopes will make him competitive in the job market again. Kimberly Adams/Marketplace

Martin Oliver worked in the steel mill in Granite City, Illinois for 22 years before he was laid off last year. Now he's training to use computer-driven machine he hopes will make him competitive in the job market again. Kimberly Adams/Marketplace
Listen Now

President-elect Donald Trump has promised to bring back manufacturing jobs, but many of those who’ve been laid off in recent years find themselves lacking the qualifications for jobs that are already coming back.

That was the problem for 61-year-old Martin Oliver of Granite City, Illinois. He worked as a machinist at the U.S. Steel mill in the city for more than two decades, then was laid off just before Christmas last year. After a few months looking for another job, he decided to go back to school.

Now he’s learning how to program the very machines that were developed to replace him.

“[It’s] kind of a polar opposite of the way things were as just a journeyman machinist doing manual work,” said Oliver of the car-sized machines he’s learning to program. “What used to take me five hours to do that can do in about 15 minutes.”

Workers like Oliver are what University of Illinois at Chicago economics professor Lawrence Officer calls the “structurally unemployed.”

“They’re not unemployed because there’s a recession or an anemic recovery,” said Officer of this group. “Structurally, their industries, their firms have shrunk or vanished, and their skills remain, but they are not easily transferable to other sectors where there’s a demand for labor.”

The state of Illinois and the steelworkers’ union have programs to help Granite City workers bridge that skills gap, like the one Lawrence Oliver is attending at Southwestern Illinois College in Granite City.

Mark Bosworth heads the Industrial Technology school there. He said the school has seen a slight enrollment boost as laid-off steelworkers seek retraining, but not everyone wants the same thing from the training. It depends on how long you’ve been a steelworker.

Many of the students in Southwestern Illinois College’s Technical Education Program are laid off steel workers learning to use new machines that do their old jobs in much less time.

“It seems like if [students] are within 10 years of retirement they’re really focusing and hoping that U.S. Steel opens back up,” he said of those in his program. “But if you’re just started to have like five or seven years at U.S. Steel, some of the students say [they] don’t want to go back.”

Martin Oliver does still want his job back — he’s only a few years from retirement — but he also recognizes his old job is probably gone.

“It’s not coming back the way I know it… That’s just a fact,” he said during a break in one of his classes. “So that’s what I have to wrap my head around is… how to adapt to what’s out there.”