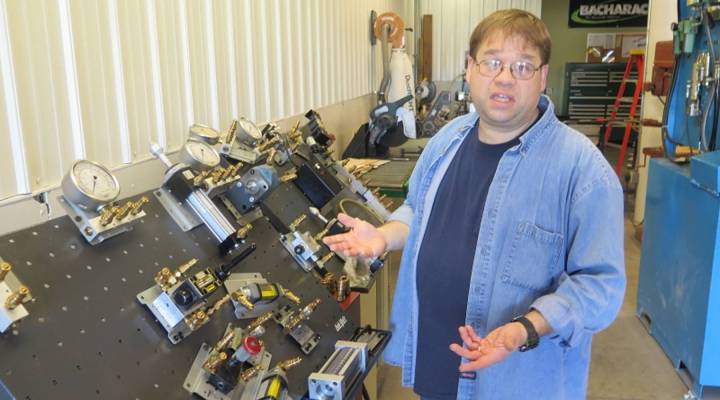 COPY
David Meyer is one of several laid off mineworkers from Keewatin Taconite enrolled in the Industrial Systems Technology program at Hibbing Community College.  Dan Kraker

Long-time mine workers on Minnesota’s Iron Range often say they’re used to the ups and downs, the booms and the busts of the notoriously cyclical mining industry.

“I’ve been laid off seven times from KeeTac in 17 years,” said Tony Drazenovich, 47,  referring to the mine where he works, Keewatin Taconite, one of two Minnesota mines owned by U.S. Steel. “That’s a lot of layoffs.”

But most of those layoffs were short, he said. And that’s what he anticipated for this one, too, when he was laid off in May of last year.

“Everybody at that time was thinking it was just going to be a little blip,” Drazenovich said.

But the layoff has dragged on, month after month. At one point around 2,000 mine workers on the Iron Range were laid off, part of a major global downturn in the steel industry.

Many of those workers — some third, fourth, even fifth generation miners — have returned to work. But several hundred are still unemployed.

“I’ve heard stories of members just dropping off their house keys at the bank, and basically jumping in their cars and heading out,” said Cliff Tobey, president of Steelworkers local union 2660 in Keewatin, where the giant open pit mine at KeeTac, several hundred feet deep, comes right up to the edge of town.

“Some of them I think may come back if things turn around, but I think some of them have made the decision that they’re out of here,” he said.

Dozens of laid off mine workers, including Drazenovich, have made a different choice. They’ve gone back to school, through a federal program known as TAA, or trade adjustment assistance, which pays to retrain workers who lost their jobs because of global trade.

Many are enrolled at Hibbing Community College in the Industrial Systems Technology program. It teaches welding, electrical and other skills to prepare students for work in a wide variety of manufacturing plants.

“When we graduate we’ll have another set of skills,” said David Meyer, who was also laid off from Keewatin Taconite. “Dedicated employees that want to get a paycheck for their work. “

Tony Drazenovich, 47, is taking classes at Hibbing Community College, 18 months after he was laid off from Keewatin Taconite. “I’m nervous, I’m not going to deny that,” he said.

For many of these workers, it has been 20 years or longer since they’ve been in school. Meyer helps tutor many of them. Some, he said, need basic help operating computers.

“It’s been a struggle, I won’t lie,” said Kevin Maxie, 51, who lost his job at Mining Resources near Hibbing. “I do a lot of homework, I spend a lot of time looking at books, keep up with it as best you can.”

Maxie is taking physics for the first time. He sometimes studies with his high school-aged daughter.

Maxie is sticking it out, and plans to graduate in May. He hopes to use his new degree to land a better job at one of the mines.

But Meyer said most are thinking of a Plan B. “They want this training so that if the mine doesn’t open up, they can go relocate. Because it really worries them about how non-dependable the feeling is in the industry.”

U.S. Steel has given no indication of when, or even if it plans to reopen Keewatin Taconite. The company initially idled the plant because of low steel prices and a surge of imports, including steel the U.S. says was illegally sold here at less than what it cost China and other countries to produce it.

In a statement, the company said those factors continue to have an impact, even though the federal government has imposed some steep tariffs.

For mine workers, “you give up hope that Keewatin Taconite is going to reopen,” said College of St. Scholastica economist Tony Barrett. “You retrain yourself, you’re going to get another job, but it won’t be like that. In rural America, you don’t get many jobs that pay $60,000 to $80,000 a year like those do.”

The best hope for mine workers on the Iron Range, Barrett said, is if President-elect Donald Trump, who talked during the campaign about getting tough on Chinese exports, imposed additional tariffs on imported steel.