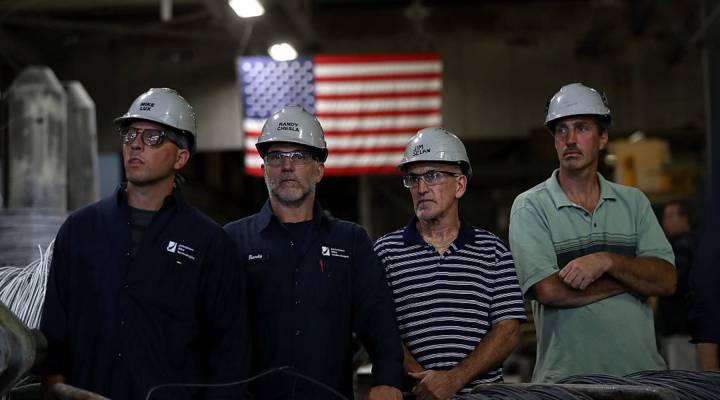 “American steel,” Donald Trump intoned while laying out his economic plan in Detroit yesterday.  “Steel! American steel!  We’ll send new skyscrapers soaring all over our country.  We will put new American metal into the spine of this nation.”

Trump said he would “put our coal miners and our steel workers back to work!”

The candidate suggested that trade deals and regulation had cost the United States hundreds of thousands of jobs in manufacturing industries like auto, steel and coal.  And he suggested that doing away with both would bring those jobs back.

But a look at recent research on the U.S. steel industry shows that when it comes to the decline of American steel industry jobs, globalization and regulation had very little to do with it.

In the four decades beginning in the early 1960s, the steel sector lost 400,000 jobs — a five-fold drop, according to Allan Collard-Wexler, assistant professor at Duke, who examined the history of the industry using detailed census data.

Initially, “we thought this was going to be all about trade,” he said.  He was in for a surprise.

Even though jobs disappeared, actual steel output declined by a small amount, roughly 20 percent — nowhere near accounting for the loss in jobs.  Steel production wasn’t leaving the United States as much as it was just requiring fewer workers.

“It was increases in the productivity of the steel industry that are generating this huge drop in employment,” said Collard-Wexler.

Specifically, something came along called the minimill – essentially a process for recycling scrap steel and turning it into higher quality steel.

It was more efficient and cheaper. “Recycling steel is a less-intensive process than smelting it from scratch,” he said.

This innovation drove a lot of steel mills out of business. Specifically, the least productive and least efficient mills. The old mills that remained in business were the ones that could produce the highest quality grades of steel.

At the same time, Collard-Wexler said, wages for the remaining steel workers rose significantly. “Steel workers today are much better paid than they were in the past.”

For Margaret McMillan, the story of American steel is a symbol of what has happened throughout the manufacturing economy. “Technology has played a huge role in changes in the manufacturing sector and in other industries as well,” she said. “It’s added value to the economy, consumer goods prices are lower because of technological progress.”

There are sectors that have lost jobs due to trade – textiles for example – and many economists believe growth in Chinese manufacturing in the early 2000s also cost U.S. jobs (though many are skeptical as to whether that damage is ongoing today). But the whole story can’t be told without technology.