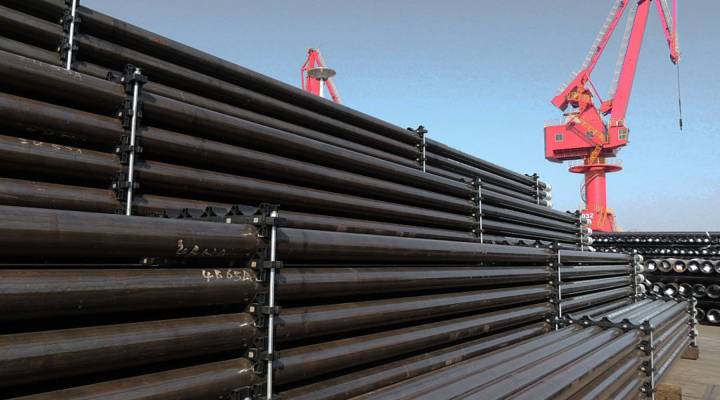 China gets punished after charges it underpriced steel

COPY
Steel pipes are seen at a port to be loaded onto ships for export to various countries in Lianyungang, eastern China's Jiangsu province on December 1, 2015.  STR/AFP/Getty Images

China gets punished after charges it underpriced steel

Steel pipes are seen at a port to be loaded onto ships for export to various countries in Lianyungang, eastern China's Jiangsu province on December 1, 2015.  STR/AFP/Getty Images
Listen Now

Certain types of steel products from China will soon face a 266 percent tariff when entering the United States. Steel producers from six other countries will also face similar, though significantly smaller tariffs.

The tariffs are the result of anti-dumping investigation by the Commerce Department, which announced its preliminary findings on Tuesday.

Dumping occurs when companies sell goods abroad cheaper than in their domestic market or, as is more often the case, for less than they costs to make.

In order to impose tariffs, “dumping has to cause injury to some U.S. industry,” said Gary Hufbauer, a senior fellow at the Peterson Institute for International Economics.

Such tariffs can stay in place for years, said Bernd Janzen, a partner in the trade law practice at Akin Gump. “Steel products, chemicals, building materials, it’s huge range of manufactured goods covered by these kinds of orders.”

In the Commerce Department’s investigation, no Chinese company responded to the agency’s request for information, which may be one reason their tariffs are so high, said Janzen.

In contrast, Indian producers will face nearly 7 percent tariffs; Japan’s will be just more than 70 percent.

Typically, U.S. tariffs on goods coming into the country are in the low single digits. For decades, the U.S. has been negotiating lower tariffs with other countries in exchange for reciprocal reductions.

“The U.S. has among the most open markets in the world and the lowest level of tariffs,” said Eswar Prasad, a trade policy professor at Cornell and a senior fellow at the Brookings Institution.

However, lots of manufactures would like to see the U.S. bring more of these types of cases.

“This argument has a lot of resonance at time when, although the economy is doing quite well, there’s still the perception that the manufacturing sector continues to hemorrhage jobs in the US and that many of those jobs are being lost to foreign countries,” said Prasad.