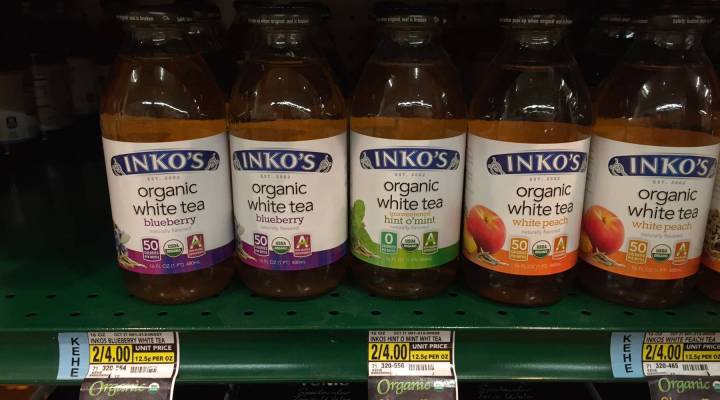 Andy Horrow is stoked to see his company’s new bottled tea in the refrigerated case in a Jewel Osco, a grocery chain in Chicago.

That fridge is prime real estate — it’s in a high traffic area, right near the check-out.

“This is coveted space,” Horrow said.

Horrow is chief marketing officer of Wholesome Tea, a small company based in the Chicago suburbs. Its new bottled tea is called Inko’s Organic Energy Tea. It’s a “healthy” take on energy drinks: a white tea base with ingredients like ginseng.

Landing the new product in the refrigerated case was luck. The young company doesn’t have a distributor coming in to Jewel Osco constantly to make sure products get into that cold drink case or are well stocked over in the organic aisle.

Instead, those tasks may fall to the retailer, which has tons of other products to stock. “The retailer has literally thousands of products to stock every day and in some cases you find old label or expired products,” Horrow said.

That was the case the day of our visit. Horrow pulled an old bottle of Inko’s off the shelf. “This is one of mine,” he said. “I’m going to buy it because I don’t want consumers having something that’s expired.”

Andy Horrow at Wholesome Tea says many of the company’s competitors benefit from more muscular distribution systems. Small food and beverage manufacturers can struggle to compete.

Many of the competing products on the shelves have the benefit of what’s called “direct store delivery” — where delivery reps come in regularly to restock and rotate products. Empty shelves are lost sales. But those distribution services are expensive and out of reach for many small manufacturers, according to Gary Hemphill, director of research with the Beverage Marketing Corporation.

“Those systems are closed off to a lot of start-ups because they’re dominated by the big companies, by the Pepsis and the Cokes,” he said. “It’s tricky to get in because those companies would prefer to be distributing their own products, because it’s more profitable for them that way.”

A surprising number of Wholesome Tea’s competitors have big conglomerates behind them. Honest Tea is owned by Coca-Cola. Sweet Leaf is a Nestle product. Tazo is in the Starbucks family. And if their deep-pocketed parent companies don’t distribute them, those brands turn to independent distributors — which, for start-ups, might still be too expensive.

Start-ups do have their advantages, though. Diana Sheehan with Kantar Retail said the big companies may have more baggage, especially in the organic and natural space.

“With the larger companies who invest in organic and natural brands, they have a credibility issue and they also have a legacy issue,” she said.

Andy Horrow has a hard time seeing small firms like his as a threat to big players, though. He used to work on big brands at Pepsi and knows their advantages.

“I think it’s hilarious to think of the small guys nipping at the big guys’ heels. Being in a big brand you have the power of the retailer listening to you all the time. You sell a lot of product, people want to work with you,” he said.

But at a Mariano’s grocery store in Chicago, Horrow did find a convert to his products. Nawatha Morris was reaching for an Inko’s tea, which has fewer calories than some competitors. She said her kids love the taste.

“They used to drink Snapple,” she said. “But I got them into drinking sugar free tea.”