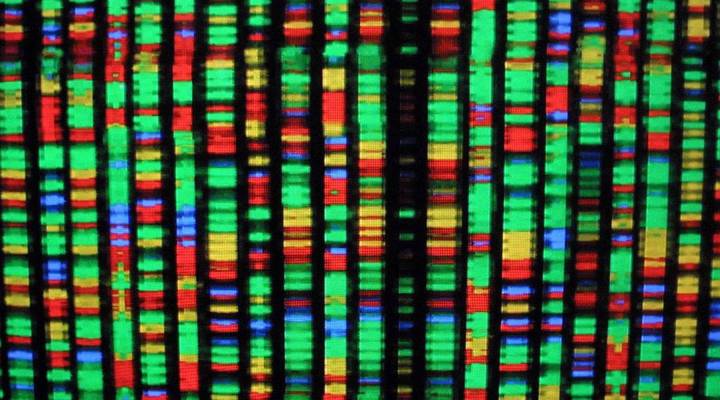 A digital representation of the human genome August 15, 2001 at the American Museum of Natural History in New York City. Each color represents one the four chemical components of DNA. Mario Tama/Getty Images
Codebreaker, by Marketplace and Tech Insider

A digital representation of the human genome August 15, 2001 at the American Museum of Natural History in New York City. Each color represents one the four chemical components of DNA. Mario Tama/Getty Images

His proposal is dead serious, not a kind of Jonathan Swift-ian exercise. And it has economic implications. It’s centered around the idea that we have passed a point of no return with man-made climate change.

There are lots of ideas on the table when it comes to fighting the environmental impact of humans and technology. As we move further and further into a world where there is vast scientific consensus, and a paradoxical public resistance to that idea, these ideas are getting weirder and weirder.

One idea floated by scientists is geoengineering; shooting aerosols into the atmosphere and cooling the surface temperature. Another, boosted again this week by a $1 billion dollar investment fund led by BIll Gates, is clean energy innovation.

Liao doesn’t discount these, but he believes in some ways that bioengineering our bodies is going to be part of the overall solution and be less dangerous than trying to change the entire planet’s atmosphere with geoengineering. On the  are five ways he thinks humans could change ourselves to fight climate change:

Yes, engineering our eyes to be more like cat eyes and get rid of the need for lighting. “Cats can see just as well as we can during the day,” says Liao. “But they can see about seven times better than we can at night. This could totally affect our consumption of energy. I mean think of that. Who wouldn’t want to see better…and see just as well during the day?”

Taking a pill that helps us feel more empathy for the rest of the world’s residents, so we think twice the next time we’re about to create waste.

Screening embryos so that we have smaller babies. Why will that help us fight climate change? Liao says smaller people use less resources. “We need more fabric to clothe them, and it takes more energy to transport them,” he says. “Add all that up. This could impact our consumption of food, the production of the vehicles and buildings we use, and even the energy to heat those buildings. Liao says as a species we’re taller than we have ever been, and that we don’t actually need to be. So we should use our selective powers to stay short.

“There’s evidence that people who are more educated tend to have fewer children,” Liao says. Since one of the biggest impacts a person can have on the climate is procreation, having fewer kids helps. How do we do this? Everything from taking the “Limitless” drug to, again, using our powers of selection when we do have kids.

Reducing the consumption of red meat has long been a mantra for anyone who wants to reduce their carbon footprint. It’s tricky math but some have suggested that becoming a vegetarian is even better than getting rid of your car. Liao wants to do this in pill form. Essentially you could use an ingestible–a pill or other form of technology that you can swallow to make you feel ill any time you consume red meat. Or, you could just go veggie the old fashioned way–with willpower. However you do it, if we all do it, one recent study from Oxford suggests we could reduce carbon emissions by 63 percent.

It’s easy to read Liao’s recommendations and be a little freaked out. Read as requirements rather than suggestions, it sounds dangerously close to eugenics. But he points out that his proposal isn’t to mandate these changes, only to suggest them.

“I’m trying to come to the table and say ‘look, here’s a whole class of solutions we haven’t even thought of,’” says Liao. “Maybe you don’t like these particular ones, maybe you can come up with better ones. But we should be thinking about them.”

Listen to S. Matthew Liao’s story and much more on this week’s episode of Codebreaker.