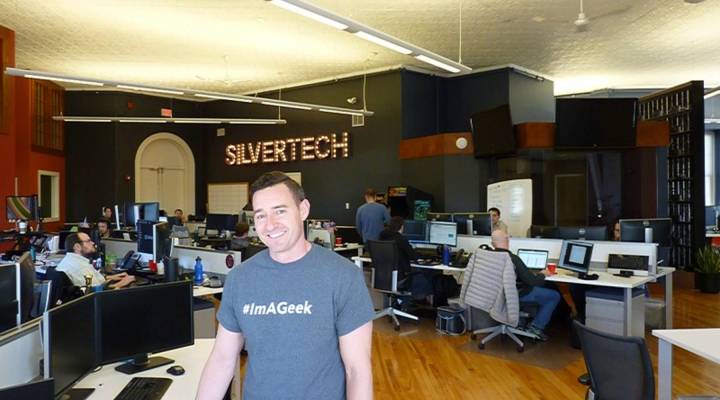 The offices of SilverTech, a digital marketing firm in Manchester, New Hampshire, are going for that Silicon Valley mystique. There’s a huge screen for employees to play old-school video games on, skee ball echoing in the hallways, and no shortage of casually dressed well-compensated coders walking around.

“The average wage has certainly gone up,” said Derek Barka, senior director of technology. “Even the starting wage has gone up probably $10,000 in the past four or five years.”

SilverTech has about 70 employees and lots of contracts in the pipeline. But the company has a problem: it is constantly scrambling to find new workers.

With a 2.8% statewide unemployment rate in October — tied for the lowest in the nation with South Dakota — there are lots of New Hampshire companies in SilverTech’s shoes right now, and not just those that need highly educated, highly skilled workers.

Take the Edgewood Center, a nursing home in Portsmouth. It has 20 job openings posted, many for positions considered low-skill, like food service and cleaning.

“We run ads, we’re lucky to get anybody to respond to those ads,” she said.

The math here is simple: there are just more jobs than workers to fill them. And that makes it a good time to be an employee, with salaries starting to inch up.

The problem is that when employers can’t hire, businesses can’t expand.

“Right now, if a company is really growing, chances are they are looking outside of the state for expansion,” said Val Zanchuk, president of the industrial parts maker Graphicast, located in Jaffrey, and also the current board president of the statewide chamber of commerce.

He said if you are a big manufacturer looking to, say, build a new plant, New Hampshire is not where you are going to do it. The workers just aren’t here.

“Some companies are just going to throw in the towel and move someplace else, where there are people available,” he said.

So, how exactly did the state end up with a labor shortage?

For starters, many younger people are choosing cities instead of the rural, small town-lifestyle New Hampshire offers.

Another factor is the state has what economists like Russ Thibeaux call a high labor participation rate. That is, most people who can work already do, meaning there’s little slack during boom times.

“If you can’t get more labor out of the people that are already here, and you have a hard time pulling more people in, it really creates a problem,” said Thibeaux, who is with the New England firm Applied Economic Research.

Throw in the state’s relatively high housings costs, and you’ve got yourself a tricky economic problem.

There are plenty of programs, though, trying to address the labor shortage. Community colleges and businesses are partnering to create apprenticeship programs to speed up skills training, and the state is also busy marketing itself through tourism campaigns.

Back at SilverTech, it’s not just attracting workers that has become the challenge. Derek Barka said it can be hard retaining them.

“They have recruiters knocking down their door every single day, so the fact that they do stay keeps me happy every day,” he said.

If the labor market stays this hot, though, it may take more than free skee ball to hold on to talent.