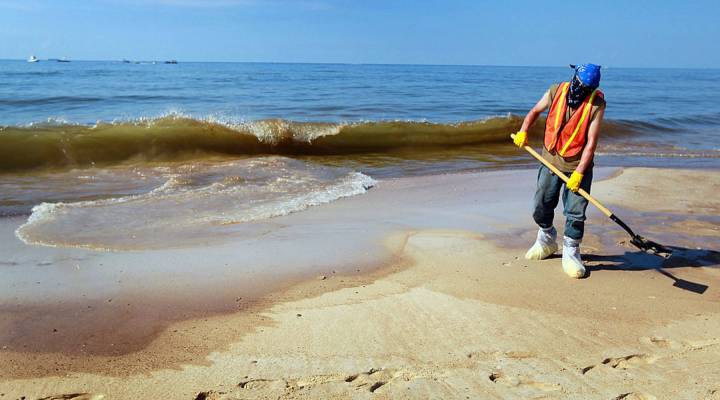 COPY
A worker scoops up oil washed ashore from the Deepwater Horizon oil spill in the Gulf of Mexico on June 26, 2010 in Orange Beach, Alabama. Millions of gallons of oil spilled into the Gulf after the April 20 explosion on the drilling platform.    Joe Raedle/Getty Images

A worker scoops up oil washed ashore from the Deepwater Horizon oil spill in the Gulf of Mexico on June 26, 2010 in Orange Beach, Alabama. Millions of gallons of oil spilled into the Gulf after the April 20 explosion on the drilling platform.    Joe Raedle/Getty Images
Listen Now

Alabama is moving ahead with a new version of Medicaid. But it’s hit some big financial bumps, and the plan has been delayed a year.

The question was how to overcome a big budget shortfall. The answer, state lawmakers agreed, was to take money from the settlement fund that BP agreed to pay the state after the 2010 Deepwater Horizon oil spill.

In Alabama, just over one in four residents — 1.2 million people — are on Medicaid. But the state’s insurance program for the poor isn’t in the clear.

At Children’s of Alabama, there are children with broken arms, birth defects, hearing impairments. It’s the only hospital in the state dedicated to children,  so it stays busy. Medicaid is its lifeblood. More than half of Alabama’s Medicaid recipients are children.

Alabama is one of 19 states that opted not to expand Medicaid under the Affordable Care Act. Instead it had big plans to overhaul the program. But it ran out of money, and the plan stalled. That worried Mike Warren, the CEO of Children’s. “About half of our revenue comes from Medicaid,” he said.

Alabama plans to launch Regional Care Organizations. They’re a network of doctors, hospitals, dentists, equipment makers. And they form a managed care system. The idea is to streamline care at a lower cost. But getting that system off the ground is expensive; the state faces millions in administrative costs alone. Plus, federal money that Alabama counted on is no longer available. Total Medicaid budget shortfall this year: $85 million.

“That was addressed using part of the BP settlement monies,” Warren said, “this year’s Band-Aid short-term approach to funding shortfalls in Alabama.”

Alabama Governor Robert Bentley said that’s exactly right: it is a Band-Aid. “But it’s better to have a Band-Aid than to hemorrhage to death right now,” he said.

The BP money — part of a $1 billion state settlement — saved Medicaid this year and next. But there’s no long-term funding. And a few of these Regional Care Organizations, the doctors and hospitals in this network of Medicaid managed care, see the writing on the wall, and they’re dropping out.

Sara Rosenbaum, a health law and policy professor at George Washington University, said this is not surprising. “The provider becomes exquisitely sensitive to changes that essentially undercut the very conditions you’re trying to create,” she said.

These hospitals and doctors are worried that once the BP money runs out, they’ll be stuck with higher costs in the long-term.

In addition to the $85 million the state is using now, it’ll take another $70 million of the BP money in 2017. Rosenbaum said this is about the time the state might want to consider expanding Medicaid. It means more low-income adults will have insurance. And it also works “to generate tremendous new revenues for health care providers that previously either had to give charity care or provided uncompensated care for people who could not pay the bills,” she said.

But Governor Bentley says Medicaid expansion will cost the state, citing the 10 percent states have to match after three years of full federal funding.  “We don’t have the money to adequately fund the program for the million people that we have right now,” Bentley said.