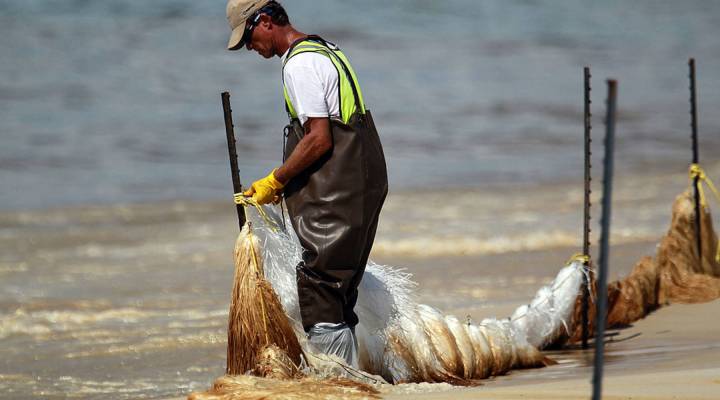 A little over six years ago, the BP Deepwater Horizon spill devastated the Gulf Coast, sending more than 200 million gallons of oil into the Gulf of Mexico. Tourism in many of the cities and towns along Alabama’s shoreline all but crumbled, and many there say without tourism, there is no economy. Over the years, BP issued hundreds of millions of dollars in claims to fishermen, shop owners and city governments to try to make things right.

Most recently, BP gave the state of Alabama a $1 billion settlement to help with the state’s recovery. But people in the region are none too happy with the way the state decided to spend it.

The Flora-Bama in Orange Beach, Alabama, has grown from one iconic beach bar on the Florida-Alabama line to a local franchise that includes a marina, a liquor store and more restaurants.

This is how Chris Sherrell, executive chef at the Flora-Bama, has picked up the pieces. Six years ago, Sherrell wasn’t sure where he’d be today. The BP oil spill hit when he and his wife ran a beach wedding catering business. Images of oil-slicked water circulated around the world, and it wasn’t long before the first bride called to cancel. Then more cancelations.

Sherrell said he, like a lot of his friends, was devastated. “We lost a car, a house, nearly our marriage,” he said. “It was tough. It was tough on everyone.”

BP started pumping money into marketing campaigns, paying out claims, putting boat owners to work. And over time, people came back to the beaches. But Alabama lawmakers took the state’s latest settlement from BP — $1 billion — and decided to use most of it to help fund Medicaid and pay off state debt.

“That was a difficult pill to swallow,” Robert Craft, the mayor of Gulf Shores, said. He said putting that money into the state’s General Fund means less money for projects within 25 miles of the coastal zone, as the state had originally planned. “And the projects that we’d planned to do, the regional recovery projects, a lot of them are no longer going to be on the table.”

Craft said overall, his city has recovered well. But he’s also thinking of some of the hardest hit areas that are still struggling, like nearby Dauphin Island.

Dauphin Island Mayor Jeff Collier said there’s history here, but ecotourism is the heart of this barrier island’s economy. After the oil spill, Collier said, it was a ghost town. There was no fishing, boating, swimming.

“So everything that we had to offer people was taken away, and so we were essentially put out of business,” he said.

Collier and other mayors and county commissioners serve on the Gulf Coast Recovery Council. They’re reviewing all the requests submitted in the region — everything from buying land for more bird habitats to road projects to ease traffic congestion.

“There’s more than 100,” Collier said. “Probably pushing a couple of hundred at this point.”

He said those requests amount to about $2 billion, but after the state took its cut, the Gulf Coast cities will get only $120 million.

This group approving projects is headed by Gov. Robert Bentley, who has been criticized for his use of earlier BP settlements. One example: He spent $1.8 million to renovate a dilapidated governor’s beach mansion. He said he’ll use it to entertain visitors to boost economic development. Same for using the BP money to pay off state debts and to help fill other budget holes.

“In the long run, this was to try to help alleviate some of the problems for the entire state,” Bentley said.

As for the Gulf Coast, Bentley said there’s already been a lot of money spent there. “I think overall they’re doing well,” he said.

Paying off debts, he said, benefits the entire state. But folks who live in the Gulf Coast say the hundreds of millions they generate in tourism dollars each year benefit the entire state, too.